Leading Ad-based Streaming Platforms Achieved $3.5 Billion in Ad Revenues Over the Past 12 Months

According to Kantar, the four leading ad-supported video on demand (AVOD) platforms in the U.S. generated $3.5 billion in advertising revenue in the 12 months to September 2021. Hulu accounted for the majority of the ad sales over the period generating $2.1 billion of the $3.5 billion total. Paramount+ was second at $822 million ads sold, followed by Peacock with $279 million and Tubi with $250 million.

The new AVOD ad spend estimates, which are the first in the industry, are now available in the company’s competitive ad intelligence offerings. These new capabilities are part of Kantar’s ongoing plan to further expand coverage and spend into digital video advertising.

The analysis, which is based on ad activity and spend for more than 2,600 brands across Hulu, Paramount+, Peacock, and Tubi, found that the AVOD platforms measured generated $302 million in ad sales in September 2021, up 46% from $239 million during the same month last year, but down slightly from $305 million in August of 2021. 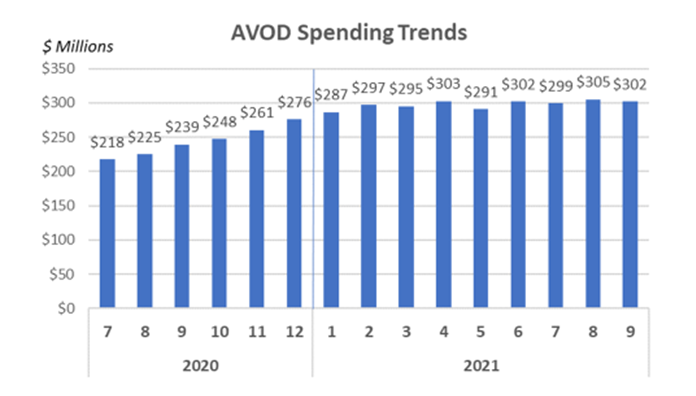 When viewed by category, Media and Advertising was far in the lead at $573 million over the past year, as these advertisers sought to connect with video fans on streaming services. Retail was the next highest in streaming investment at $325 million, fueled in part by Amazon which spent $72 million across the measured services.

Other prominent advertisers on streaming included Capital One, which spent $74 million on the platforms, as well as Verizon, at $57 million, and Geico, at $50 million. These findings clearly indicate that leading advertisers have embraced AVOD and that AVOD platforms are taking a growing role in their media plans.

“AVOD is one of the fastest growing platforms for ad investment due to its ability to deliver targeted, incremental reach,” says Stephen Davis, Global Product Leader for Advertising Intelligence at Kantar. “We are bringing this new service to market as it is essential for the industry to have insight into ad spend trends in the category in order to make better, informed decisions for both buying and selling. Kantar is now uniquely positioned to provide insight into how brands are managing Video Strategies across media from Linear TV, Online Video, YouTube, and now AVOD.”

Coverage of the AVOD market will expand in 2022 to include more than approximately $8 billion in reported AVOD spend, including PlutoTV, HBO Max, Discovery+ and Prende TV. Kantar’s Ad-Supported Video on Demand (AVOD) ad spend estimates are integrated with placement and creative data and fully harmonized with Kantar's Brand Central taxonomy.

Kantar’s advertising intelligence solutions continue to be the most comprehensive and reliable source of ad spend and creative insights relied upon to monitor industry trends, create media mix models, and to inform competitive analysis. Learn more about Kantar’s Advertising Insights’ AVOD data and its capabilities to provide expedited insights using artificial intelligence by visiting https://info.kantarmedia.com/avod and requesting a demo.