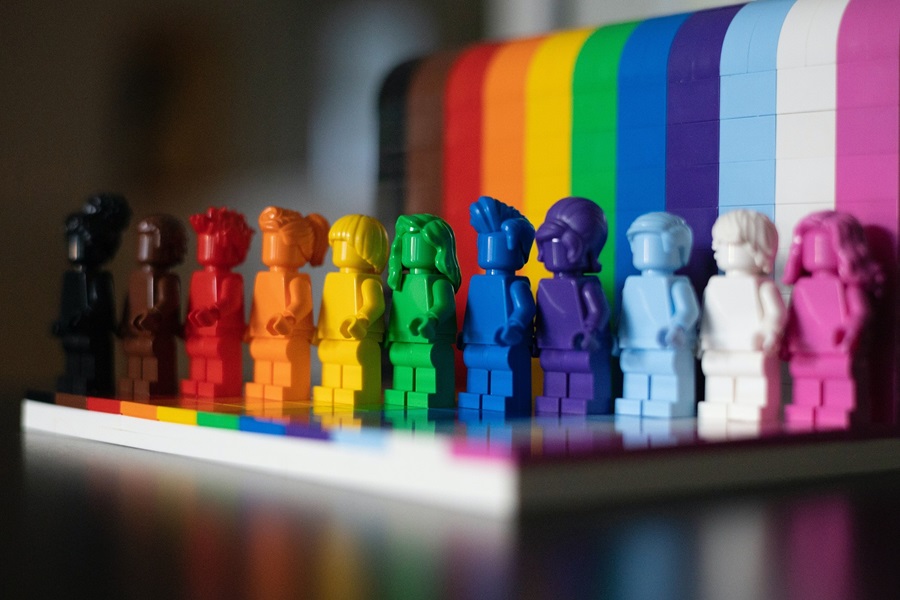 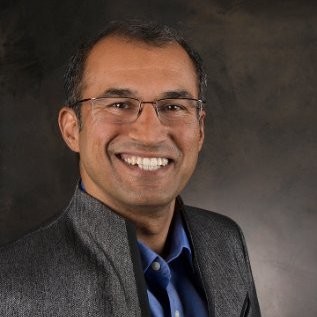 Consumers are increasingly looking to brands to be champions of change on matters of equality and representation. Research in social psychology has shown that a marked increase in exposure to the LGBTQ+ community in two major forms has contributed to this change. Consumers today are more likely to have a direct relationship with someone in the LGBTQ+ community, and their increased portrayal in popular culture has moved the needle.

According to our research, 65% of consumers say that it’s important that the companies they buy from actively promote diversity and inclusion in their own business or society as a whole. For brands, inclusive advertising – whether that’s diversity of race, gender,  religion, or sexuality  – is imperative. But how do you get it right?

It's estimated that 7%-8% of the U.S. population identifies as LGBTQ+. This could underestimate the total given that the U.S. Census Bureau found that around 2% of Americans classified themselves as ‘something else,’ while another 2% said they ‘don’t know.’

Despite this, we only see overt representation of gay and lesbian characters in 1% of the ads that we test. Broadcast TV has been far more progressive than other media, with 12% of television ads overtly representing the community and championing LGBTQ+ inclusion. The advertising industry and marketers need to follow broadcast TVs lead.

In order to get to the bottom of what it is that helps drive positive impact when it comes to representing LGBTQ+ in advertising, we assessed the reasons for success, and failure, of ads.

Increasing LGBTQ+ representation in advertising can have a positive impact on the LGBTQ+ community, Gen Z and Millennials, all of whom can impact the future ROI of a brand.

The LGBTQ+ community has huge spending power, with an estimated $1.4 trillion at their disposal. And, according to a recent study, nearly half of consumers in the LGBTQ+ community said they would be more likely to buy from brands who show LGBTQ+ inclusion in their ads.

Moreover, 27% of consumers say they are ready to stop using brands that do not support the LGBTQ+ community, and 50% of LGBTQ+ and over a third of Gen Z and Millennials would do the same. 43% would boycott anti-LGBTQ+ brands. If you’re looking for a way to boost ROI, diverse advertising is key. 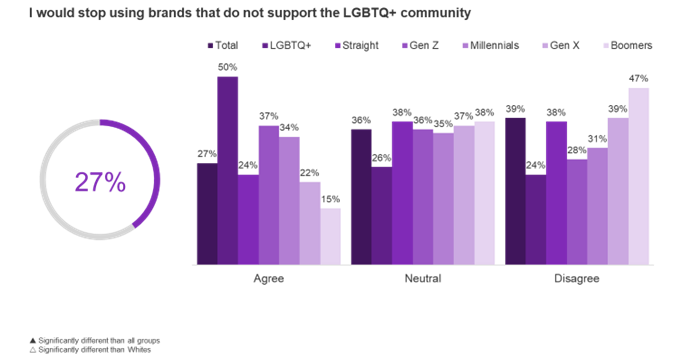 The importance of diversity in advertising can also be seen in analysis of the effect it has on a brand’s long-term sales.

Inclusive advertising is shown to positively impact short term sales and longer-term brand-building. However, it is clear from our databases that it is not enough to just ensure LGBTQ+ inclusion in your ads in order to drive sales. A recent Kantar study shows that solely including underrepresented groups in ads has no impact on an ad’s ability to build brand equity or increase short-term sales. In fact, advertising campaigns featuring under-represented groups have almost identical short-term sales likelihood and contribution on long-term brand equity to the average campaign.

Instead, the key to brands releasing a successful ad campaign is to show underrepresented groups in a positive way. When we look at ads that feature underrepresented groups positively, there is a huge difference in the potential to influence short term sales and build brand loyalty in the long term. The table below gives an indication of just how diverse advertising and LGBTQ+ inclusion affects sales:

It’s not just enough to add a rainbow in your marketing efforts and call it a day. Brands should be wary of 'rainbow washing’ – when a business (or other entity) uses the Pride rainbow flag to appear as though they are inclusive but don’t actually do anything to help the LGBTQ+ community. These brands simply want profit off the ‘inclusive’ message.

Instead, brands need to embed LGBTQ+ inclusion into their company culture. Consumers are watching brands closely. In order to successfully appeal to the LGBTQ+ community, brands need to show that they care, not just say that they do.

How to get LGBTQ+ advertising and representation right

Empathy is key to driving advertising success. But there isn’t a one-size-fits-all approach. Businesses should choose a strategy that is authentic to their messaging and their purpose. So how do you get this right?

We analyzed a number of ads with LGBTQ+ inclusion and have identified three of the top approaches to help shape your strategy:

The industry needs to understand all groups within the LGBTQ+ community; representation must go beyond just lesbian and gay people. It is important that LGBTQ+ inclusion in ads isn’t stereotyped and that members of the community are shown in an equal and respectful manner.

LGBTQ+ celebrity casting helps increase awareness and support, but needs to be accompanied with a theme that resonates with the community. A a great example of LGBTQ+ inclusion done right is this ad from Gatorade.

The campaign highlights the equal capabilities of women and men in sports, focusing on channeling your inner competitor. Soccer star Abby Wambach, who is a member of the LGBTQ+ community, goes head-to-head against Olympic track legend Usain Bolt. The ad also pays homage to Gatorade’s 1997 “Anything you can do, I can do better” commercial with Michael Jordan and Mia Hamm — who both make cameos in this new version.

Based our study conducted, over 70% of LGBTQ+ and straight respondents thought that the ad had a progressive view of modern society and positive impact on those underrepresented among straight and LGBTQ+. LGBTQ+ respondents appreciated the diversity in the ad.  The ad was in the top 25 percentile for involvement and 96 percentile in terms of emotional engagement based on facial coding.

There are ways to show a more diverse and inclusive family. The focus of portraying LGBTQ+ need not be only their identity. They also play a role of spouse, son, daughter, father or mother and showing those bonds and acknowledging them can go a long way in connecting with that audience.

For example, Zola launched a series of commercials where various couples wonder what their wedding would have been like if it had been planned through the custom wedding website and one of which involves a lesbian couple’s wedding. The LGBTQ+ inclusion feels natural. It isn’t overtly commented on, but is a natural part of the storyline.

The ad also employs humor with the traditional vows being replaced by one woman saying, “I Ava, wonder if our guests would have arrived on time if we had a custom wedding website.” The ad was moderately Involving (top 40 percentile) and scored well (79%) on showing a progressive view of society and having a positive impact on those underrepresented in advertising among LGBTQ+.

It was also emotionally very engaging (96 percentile) based on facial coding and more enjoyable for LGBTQ+ compared to straight X Cis Gender. They enjoyed the inclusive and comedic aspects of the ad – they engaged with the opening scene showing two women getting married, the funny guests, the vows at the end and the kissing scene. The kissing scene, however, did create dissonance among the straight and cisgender audience, 25% of whom found the ad spontaneously annoying. Therefore, showing affection between same sex couples needs to be handled carefully and the brands need to be prepared in case of any backlash.

The third approach to getting LGBTQ+ inclusion right is by using emotionally powerful stories that touch on human truths, increase awareness, and inspire everyone. Better understanding issues and aspirations helps to create more impactful ads.

This advertisement from Indeed demonstrated this amazingly well. The commercial stars actor River Gallo, who uses they/them pronouns in real life, and the campaign showed Indeed’s empathy for trans- and non-binary candidates on the hunt for employment. The initiative aligns with Indeed’s mission to “help all people get jobs.”

The ad was highly Involving (top 25) and scored well on showing a progressive view of society and having a positive impact on those underrepresented in advertising among LGBTQ+ (86%) and straight X cis gender community (72%).

LGBTQ+ consumers found the ad very engaging (89 percentile) based on facial coding. They enjoyed the job search tips for transgender and nonbinary individuals, as well as Taylor feeling unsure and then happy when the interviewer asks for the pronoun that should be used.

Of all the ads we tested, this was the most enjoyable among the LGBTQ+ community, who appreciated the realistic casting and a story that took a page from some of the issues they deal with. The empathy shown was a powerful way to connect.

How advertisers can champion diverse advertising

Given the challenges the LGBTQ+ community faces, ads need to tell real and authentic stories that inspire, educate, and give hope. Empathy is key. Ads that make it clear what kind of difference a company is making for LGBTQ+ consumers have greater potential than ones that simply endorse and affirm LGBTQ+ people in general terms.

As we’ve seen, inclusion and LGBTQ+ inclusion and representation in advertising is not only morally the right option, but it is essential for modern brands to thrive in today’s society. Get in touch  to see how our brand and advertising experts can help you optimize your brand’s messaging and learn more in our recent webinar “The Power of Inclusive advertising – Reactions to LGBTQIA+ ads” now available for viewing.

Read: How diversity in advertising can unlock brand growth

Read: The power of inclusion and diversity in advertising

Read: Inclusion and diversity - how to meet great expectations

Get in touch
Related solutions
Ad Testing & Development
Grow your brand with extraordinary creative. Know how your ad will perform, and how to improve it to maximize ROI.
Learn more
Multimedia Campaign Effectiveness
Optimize your media mix across channels to deliver impactful campaigns and improve return on investment.
Learn more
Behavioral Sciences
Understand how to best influence the implicit drivers of human behavior to increase brand choice.
Learn more