Is Amazon making too many enemies?

Amazon’s aggressive pace of disruption could be scary for other companies.

Amazon is on a quest to become the first company with a trillion dollar market cap, and it’s not far away from accomplishing it. Jeff Bezos’ ambitions have never been small and to achieve such a task will require more than a few battles along the way. To be the best you need to beat the best. It is a retailer, a technology company, an entertainment destination, a growing advertising platform, even a delivery company with its own fleet of planes. If we just look at what they are doing around retail, the number of different business units operated by Amazon is astonishing. We are talking about the most dynamic retailer of this century, an absolute powerhouse.

Amazon’s aggressive pace of disruption could be scary for other companies. While the retailer has shown its willingness to partner in the past, its growing ambitions and hunger for new verticals may deter potential partnerships, or create more distrust from companies that have been bruised by Amazon’s strategies in the past.

Amazon’s power resides in its cross-channel synergies. These drive what makes Amazon strong and resilient. Take Amazon Prime: bundling a compelling offer in a well-packaged membership scheme enables the retailer to link shoppers across complementary business without leaving its ecosystem. Amazon is demonstrating the power of its synergetic ecosystem, parts of which are increasingly encroaching on new areas of commerce and new industries, meaning that new types of companies are viewing Amazon as a new threat. 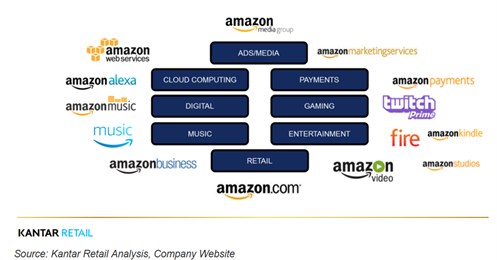 Companies will need to rethink their strategy to challenge a company like Amazon and many aren’t taking up this task alone.

Is Amazon making too many enemies?

The growing opposition towards Amazon is heating up in markets where Amazon is still not a dominant force. eBay, Tencent and Microsoft have all bet on Flipkart as the winning horse in the race for eCommerce in India. For eBay, who wasn’t able to retain territory against Amazon and the local players, the deal makes perfect sense, especially considering Flipkart’s acquisition of eBay’s India arm as part of the deal. For Tencent, the top brand in China according to Kantar’s BrandZ report, and the operator behind WeChat, expanding to India is a priority. And what is Microsoft doing here? Cloud computing. Amazon’s AWS is the market leader in a territory that Microsoft’s Azure aims to conquer.

Ahead of Amazon’s entrance in Southeast Asia, Alibaba-owned Lazada is teaming up with multiple companies to offer a Prime-style membership package. In particular, it is partnering with two not-so-small disruptors: Uber and Netflix.

The membership, called LiveUp, with an annual fee of around $21, offers subscribers access to promotions and faster/free delivery from Lazada and Redmart (the Singapore based online grocery company bought by Lazada less than a year ago). It includes a subscription to Netflix and discounts on Uber rides and Uber Eats. It is available in Singapore, a digitally savvy country, and the market that Amazon is targeting as its first entry point in Southeast Asia, though sources say Lazada aims to expand into new regions and partners. This compelling partnership combining Lazada, Uber and Netflix, may not have happened without the fear and pressure to defeat Amazon.

As you can imagine, Amazon is not making a lot of friends with its ambitious, cross-channel plans. Companies are saying “together we are stronger” as they look to leverage their position and continue competing with Amazon. This will spur more investments by Amazon as they face stiffer competition to win in new territories and verticals. Companies and brands need to get smarter on how to deal with Amazon. It doesn’t matter where and how you operate, chances are Amazon is coming for a market near you.