COVID-19 recovery hinges on Americans’ perceptions of their personal finances

Americans are redefining the way they spend and where they find value. Businesses must meet them there. 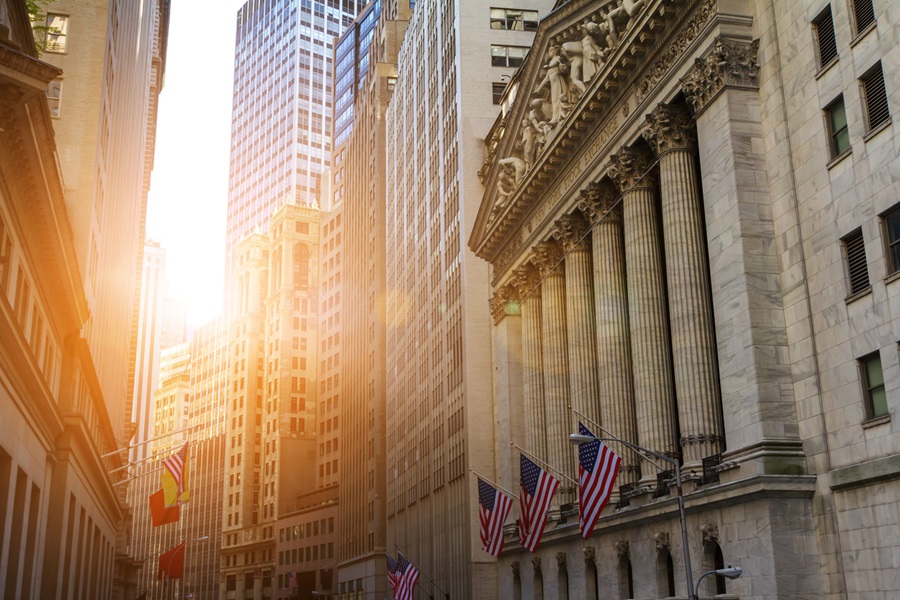 Get in touch
CoronavirusConsultingConsumer Shopper & Retail

There is perhaps no more important, fragile, and complicated relationship than the one between Americans and their money. Capitalism is a hallmark of American culture, and consumerism is, in turn, a core American value. But economic uncertainty often challenges those principles, and tough economic realities like recessions and downturns often require consumers to redefine their approach to earning, saving, and spending. Understanding how consumers have reacted to disruption in the past is paramount in understanding how they’ll adapt today and tomorrow.

Hindsight: The importance of economic perceptions amid economic realities

The U.S. MONITOR has been measuring people’s attitudes about their finances for decades. In the last 30 years we’ve helped our clients understand Americans’ preference for contentment over materialism in the early 90s, adapt to the mainstreaming of affluence in the late 90s and early 2000s, adjust to the recession mindset of the mid-2000s, and unlock growth in the new slow growth reality of the late 2010s. Each of these economic eras had its distinctive impact on consumer behavior, but MONITOR’s tracking of consumer attitudes helps parse out the nuance of how people really feel about their financial situation. 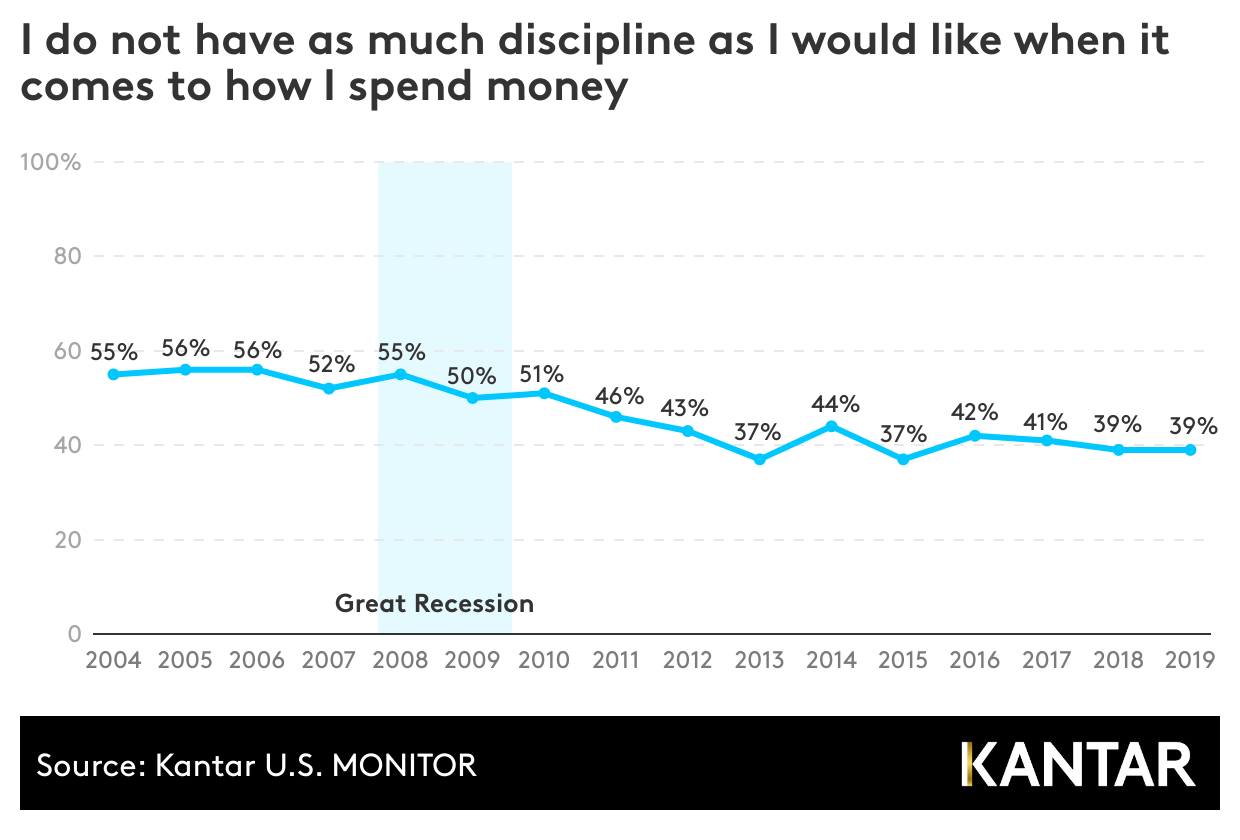 It’s easy to generalize and say, for example, that people will rein in spending when times are tough and spend more freely when the economy is healthy. However, despite the ups and downs of the broader economy, MONITOR has watched consumers feel progressively more disciplined about their spending habits over the last 15 years. Insights like this help our clients act pragmatically, responding to and anticipating consumer perceptions in the context of their economic realities. Assuming a person will tighten the purse strings just because the macroeconomic indicators suggest they should does nothing but leave opportunity on the table for a business. Economic perceptions are just as valuable as economic realities.

Insight: Consumers’ resilience is helping them weather the COVID-19 downturn

The immediate economic fallout in March 2020 looked like it had the potential to crater the global economy for decades. Stock market losses and record unemployment certainly got consumers’ attention, and as the economy literally shut down, consumers’ willingness and ability to spend came to an immediate halt. But their reaction amid the recovery has been a display of consumer resilience. The COVID-19 recession increased consumers’ economic anxiety, but as the economy recovered, stimulus checks were cashed and deposited, and employment figures crept back up, anxiety levels shifted to their lowest point in years. 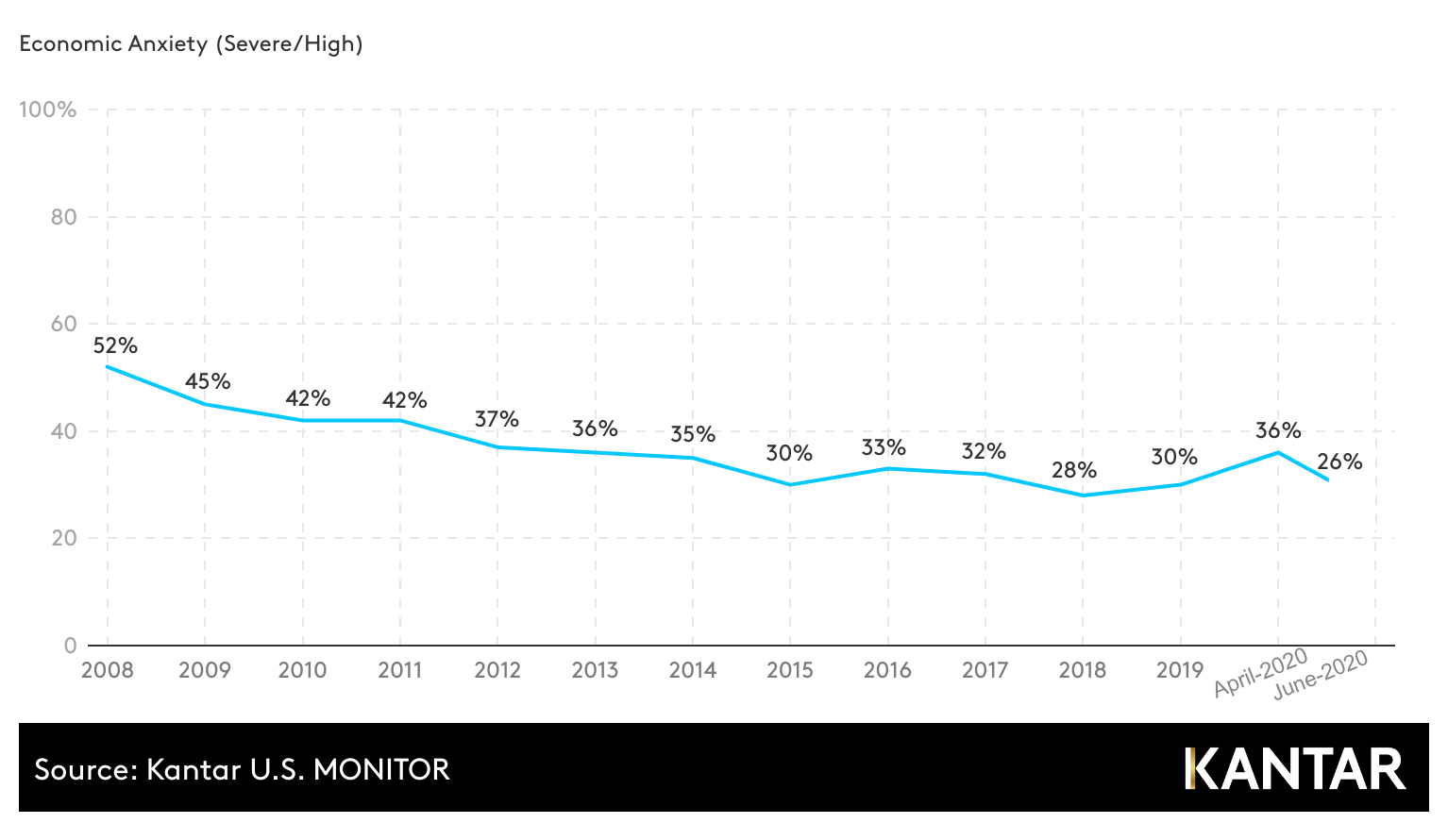 Like many economic issues today, this recovery has not been equally distributed. According to February 2021 U.S. MONITOR data, 32% of employed Americans are earning less than they did before the pandemic and 57% are trying to spend less than they did 12 months ago. At the same time, 41% of American adults say that the coronavirus will have no impact on their household income whatsoever.

But don’t underestimate the power of perceptions. While consumerism is a core American value, so is optimism. Even when downtrodden after a year of life amid a pandemic and its associated economic hardships, Americans will do what it takes to return to a sense of normalcy in the marketplace. They are redefining the way they spend and finding value in new places. Businesses must meet them there.

Foresight: A K-shaped recovery until the outbreak’s end

Until then, personal finances and spending will look very different for different groups of Americans. Low-income consumers and women—who have been disproportionately affect by both the health and financial disruption of the last year—will also be the least likely to recover their pre-pandemic spending habits. Demand will instead come from wealthier, less-affected cohorts whose spending likely changed very little in the last year. Combined, this foretells a slow and unequal recovery in consumer spending until the outbreak end is reached. 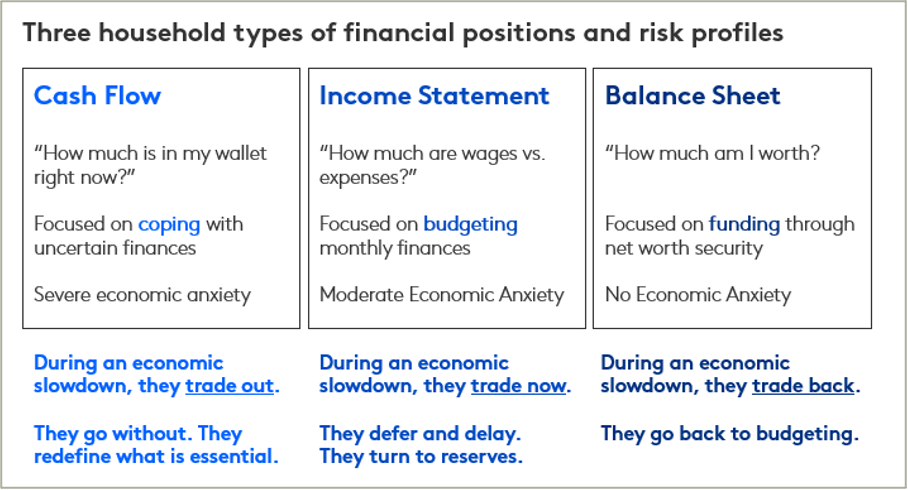 In the meantime, businesses can focus on three different financial consumer segments—cash flow, income statement, and balance sheet—to understand how their spending behaviors are likely to continue until the economic end of the pandemic is reached. For more information about these three household types, see our 2019 FutureView Going Fast in a Slowdown.

Read: COVID-19 sparks a shift away from American materialism

Read: America at home: How we've adapted our homes for a COVID-19 world