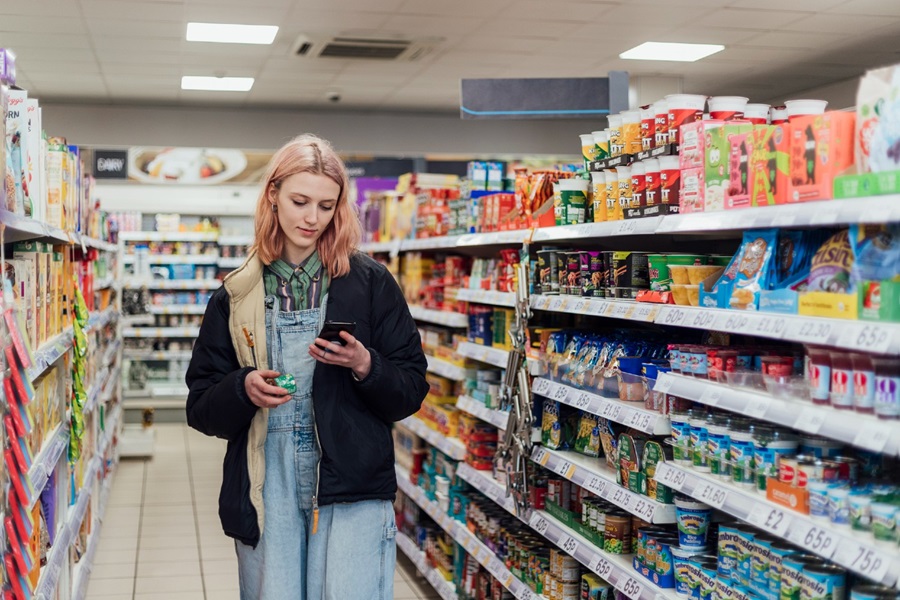 Take-home grocery sales increased by 7.6% in the 12 weeks to 25 December 2022 according to our latest figures. Year-on-year growth in December was even higher at 9.4%, the fastest rate recorded since February 2021, with sales reaching a new record at £12.8 billion.

Monthly grocery sales were a whopping £1.1 billion higher in December versus last year, breaching the £12 billion mark for the first time.

Value sales are up significantly but grocery price inflation is the real driving factor behind this rather than increased purchasing. If we look at the amount people bought this period, sales measured by volume are actually down by 1% year-on-year, showing the challenges shoppers are facing.

This story played out across the traditional Christmas categories. For example, value sales of mince pies soared by 19% but volume purchases barely increased at all. Christmas puddings were popular, growing by 16% in value and 6% in volume terms.  Brussels sprouts were off the menu for some households as the proportion buying them fell to 45% from 48%.

The FIFA men’s World Cup was a boost for the take-home beer market. England’s Quarter Final match against France on 10 December saw sales hit their biggest daily takings of the year, surpassed only by the Friday and Saturday before Christmas as people stocked up on festive drinks.

Grocery price inflation now stands at 14.4%, down slightly from 14.6% in November. This is the second month in a row that grocery price inflation has fallen, raising hopes that the worst has now passed. However, it’s still a painfully high figure at the current rate, impacting how and what we buy at the shops.

Consumers continued to trade down to supermarkets’ own label products this period, with sales rising by 13.3%, well ahead of a 4.7% increase in branded lines. The British supermarket sector is more competitive than ever and the grocers are keen to retain customers by offering their own festive alternatives.  This has included an emphasis on premium own label products, giving consumers a way to treat themselves this Christmas. These lines always do well at this time of year and this festive period was no exception with sales growing by 10.2% to hit more than £700 million for the first time. Tesco’s Finest range remains the single largest premium own label line by some distance, while Aldi and Lidl were the biggest contributors to the premium own label sector’s overall growth in 2022.

Busiest month in stores since March 2020

Friday 23 December was the most popular shopping day of the year, with more than half of the nation’s households going to stores or receiving a delivery. Shoppers took to the supermarkets in their droves in the immediate run-up to the big day, but this was also evident throughout the month of December as people visited physical grocery stores 5% more often than this time last year. In fact, December was stores’ busiest month since the start of the pandemic.

The online grocery sector also remained in growth with value sales up 4% year on year.  However, there was a slight decline in online’s total share compared to Christmas 2021, nudging down by 0.6 percentage points to 11.6%. Inflation’s impact can be seen on this part of the market too as the average cost of a virtual basket now sits at £93.06.

The latest period saw a marked increase in the purchasing of cold and flu related items versus a year ago. Bouts of cold and flu dented some people’s enjoyment of seasonal festivities and sales of cough lozenges were up by 54%, while the market for decongestants grew by 36%. Facial tissues’ sales also increased by 35%, as people tried to deal with a particularly harsh time for winter colds. 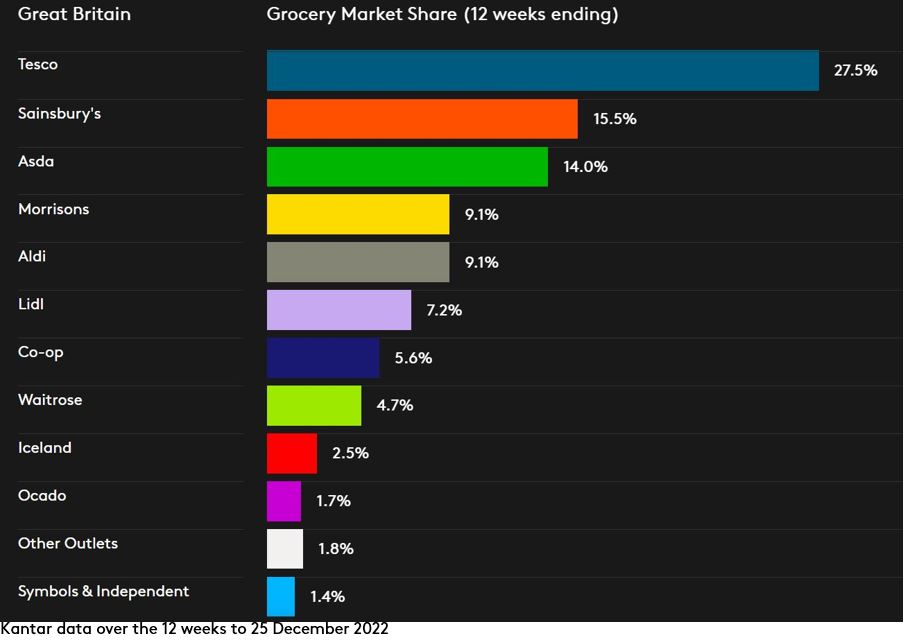 Buoyant Christmas sales were enjoyed across the board this month. The traditional grocers still captured most of the Christmas purchasing, with Tesco, Sainsbury’s, Asda and Morrisons accounting for more than two thirds of all spending.

Asda led this group, with sales up by 6.4%, closely followed by Sainsbury’s and Tesco which achieved sales growth of 6.2% and 6.0% respectively.  Despite sales falling by -2.9%, Morrisons had its best performance since June 2021, standing the retailer in good stead for a return to growth in the new year.