Take home grocery sales have slowed in Ireland, and consumers are starting to return to pre-COVID-19 habits. 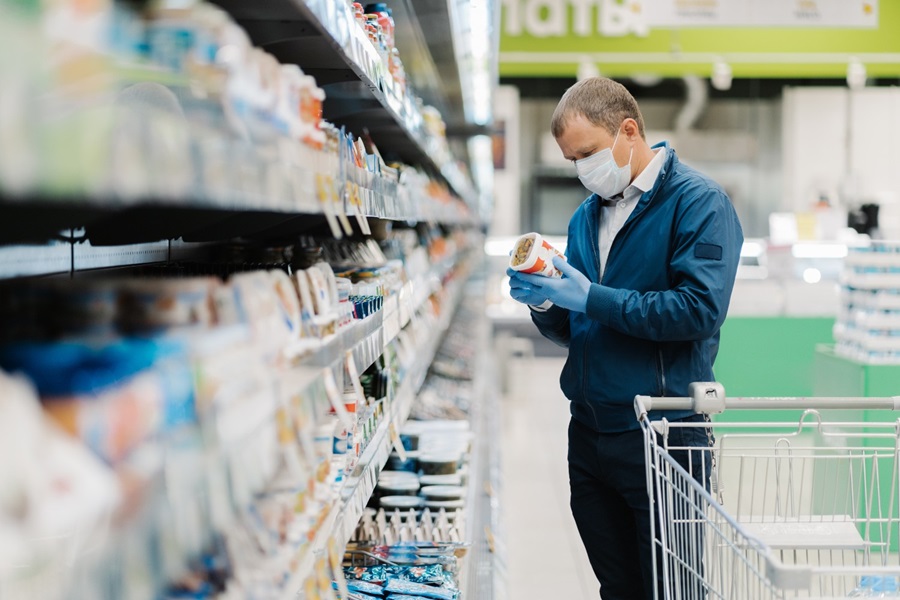 The latest figures from Kantar show that take-home grocery sales growth in Ireland slowed to 18% year on year during the 12 weeks to 9 August 2020. While still significantly higher than pre-pandemic levels, grocery spend of €930 million over the latest four weeks was the lowest since February as the country eases out of lockdown.

With restrictions on movement and eating out lifting, grocery spend is climbing down from the record-breaking heights we saw in previous months. A year-on-year comparison shows that shoppers still visited stores four fewer times over the 12 weeks, but trends are less stark than they were at the peak of lockdown.

The relaxing of rules across much of Ireland means shoppers are less inclined to favour large, infrequent shops. People spent approximately €5 less per trip over the past four weeks compared with April, picking up fewer items in store as they start to return to pre-COVID-19 habits.

However, online sales continued to accelerate. A staggering growth rate of over 125% drove the channel to a record market share of 4.6% of total sales this period, contributing an additional €75.1 million to the market.

Online isn’t the only stand-out performer. Economic uncertainty and predictions of recession have failed to dampen consumer appetite for branded groceries. Brands have managed to capture an impressive proportion of consumer spend over the latest period, amounting to an additional €245 million and outpacing private label to grow by 23.4%. It suggests that people are choosing to treat themselves in store with little luxuries while we’re all spending more time at home.

Aldi and Lidl have both seen branded sales soar, but the retailers’ reputation for value means they also stand to benefit should shoppers look to tighten their belts. Aldi recorded strong growth of 18.4% this month. Meanwhile it has been a busy few weeks for Lidl, which launched its rewards scheme Lidl Plus and achieved the strongest growth rate of all the major retailers this period, helping it to its highest ever market share of 12.8%.

Despite a wet and rainy summer, the Irish government made a strong case for holidaying within Ireland’s borders when it introduced its Stay and Spend tax incentive in July. The bad weather didn’t dampen spirits and sales of firelighters and logs were boosted by people’s new summer plans, growing by 77% over the latest four weeks as we enjoyed barbecues and camp fires. Hotel breakfasts were swapped for homemade alternatives and eggs, bacon and sausages all grew ahead of the market in the same period.

After months of exceptionally strong growth, take-home alcohol sales have begun to taper. Alcohol sales are up by 56% over the past 12 weeks, but this represents a significant slowdown from the 76% growth rate we saw last month, as people get used to new rules and are more inclined to socialise out of home.

All of Ireland’s traditional retailers registered growth over the latest 12 weeks. Buoyed by their online offers, SuperValu continues to hold the highest market share at 22.3% and Tesco took second place at 21.1%. SuperValu remains the only retailer to attract new shoppers this period, contributing an additional €624,000 to its growth. Bigger baskets, with volumes up 25%, and higher average prices drove growth for Tesco this month.

It was a similar story for Dunnes – the retailer again recorded the highest average spend per trip while also experiencing an increase in volumes and higher average prices to hold a 20.5% market share.

Get in touch
Related Solutions
Food & Beverages Usage Panel
Understand what, how, when, where and why consumers are eating and drinking, to make good marketing decisions.
Learn more
Consumer Goods Panel
We monitor FMCG purchases and trends across all retail channels, through the biggest consumer panels globally.
Learn more
Out-of-Home Panel
Get useful insights and trends data from our consumer panels for food and beverages consumption and use outside of home.
Learn more