Take-home groceries in Ireland fell by 2.2% in the latest 12-week period. With spending remaining higher than in 2019, how are shopper behaviours changing? 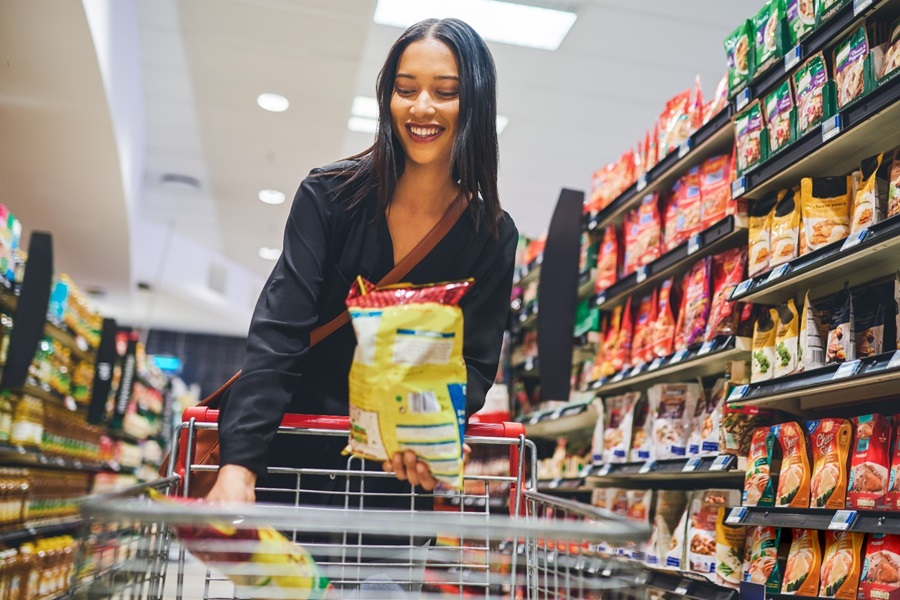 Our latest Grocery Market Share figures show sales in Ireland fell by 2.2% year on year in the 12 weeks ending 3 October 2021. The decline reflects the fact sales are still being compared against the extraordinary levels of shopping seen during the lockdowns in 2020. Spending remains 9.4% higher than in 2019.

It’s a nuanced picture in the Irish grocery market at the moment. The lifting of social restrictions and high vaccination rates mean shoppers are more comfortable going out and visiting physical stores, but they also mean people’s social calendars are filling up again. More socialising means people are living less regimented lives, and with more eating at restaurants, pubs and on the go, the reliance that many had on supermarkets to get their meals last year is starting to fade. That is evidenced in the latest four week ending data, which shows supermarket trips are falling by 4.5% year on year and the amount bought per visit is also down 0.9%.

Online sales rise as shoppers get too busy to visit supermarkets

Busier routines and less time to shop in store means that many people have turned to online shopping. The latest four weeks saw online sales jump 7.1% year on year, adding €3 million to the market.

The further loosening of social restrictions on 22 October is not expected to herald major changes for the grocery sector. The relaxation of restrictions in Ireland has been a gradual process and people have already been enjoying increasing freedoms, with knock-on effects at the supermarket tills. We expect many office workers to continue to work flexibly, which will mean a mix of both in home and on-the-go eating at lunchtime.

People are already back visiting pubs and restaurants too, so there shouldn’t be a major change in that sector either.

Shoppers are certainly eager to make the most of relaxed restrictions to enjoy calendar milestones this year. People will be making up for lost time with their Halloween festivities this autumn. While there was no celebration in 2020, it looks like spooky season is back with a bang. Sales of pumpkins soared 32.1% over the past 12 weeks compared to last year, while sugar confectionery and share bags of chocolate are up 6.4% and 15.3% respectively, as people get ready for trick or treaters.

All eyes were on the Irish economy last week as the government set out the latest budget announcement for the year ahead. Shoppers will be keen to keep a close watch on their grocery spending too – the past 12 weeks brought the highest levels of inflation in the market since March 2021. Prices are 0.6% higher than a year ago, with healthcare, hot beverages and frozen food the most affected categories – up 8.0%, 5.1% and 4.6% respectively.

Despite prices going up, consumer confidence is high. Dunnes was the only retailer to recruit new shoppers this period as it and Tesco found favour through more premium items. Dunnes typically has its most successful months in the autumn as shoppers favour branded items and take shelter from the elements in its shopping centre locations. New customers contributed an additional €26.2 million to its performance and Dunnes now accounts for 21.9% of grocery sales. Tesco’s market share increased 0.5 percentage points to 21.4% and it also enjoyed success through branded items – it saw customers spend an additional €13 million on well-known names this period.

SuperValu continues to hold the largest share of the grocery market this month at 22.3%. Its shoppers visited more frequently than any other retailer – on average 21 times in the past 12 weeks. Aldi was boosted by store openings across the country and welcomed a second consecutive month with a record-breaking share – now at 12.8%. It grew especially well in Connaught and Ulster, with sales up 6.9%, the strongest among all retailers. Lidl held its share steady at 12.7% this period.

Read: Savvy British shoppers save fuel with fewer store visits, but eyes are set on Christmas