Take-home grocery sales fell by 4% during the 12 weeks to 8 August. The impact of COVID-19 on people’s spending continues, as grocery sales remain 9.9% higher in the latest 12 weeks vs 2019. 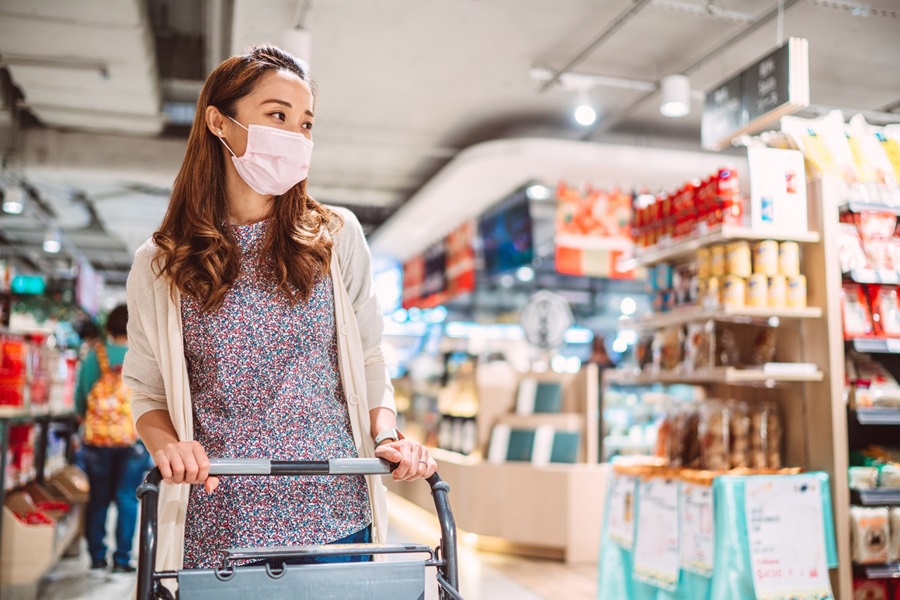 The latest take-home grocery figures from Kantar show sales fell by 4.0% during the 12 weeks to 8 August 2021 compared with the same time last year. In the shorter term, sales are declining much more slowly: by 0.5% over the past four weeks. It is apparent that COVID-19 is still having an impact on people’s spending, as grocery sales remain 9.9% higher in the latest 12 weeks than the same period in 2019.

In the past month, grocery sales were just 0.5% lower than this time last year, the best four-week-ending market performance since April. In monetary terms at least, we seem to be in a similar place to 12 months ago, but if we dig deeper into the data, we can see that our shopping habits are actually very different. With the end of social distancing restrictions, people have been happier to head into stores to make more regular, smaller shops. Consumers made an extra 108,000 shopping trips this month, while average basket sizes were 10% smaller.

The gradual return to more traditional behaviour is also affecting online grocery sales. Take up of online grocery shopping grew rapidly during the pandemic, but as lockdown restrictions have loosened a divide is beginning to emerge. Those who have come to love the convenience of an online shop are sticking with it, ordering regularly and spending on average more than two thirds of their total grocery bill online. But the unconverted are starting to drop away, preferring to get back to store instead. Just over 20% of the population bought groceries online in the latest 12 weeks, the lowest level we’ve seen since October last year, while the share of grocery sales made online now stands at 13.0%, down from a peak of 15.4% in February.

This shift away from online has contributed to Ocado’s sales falling by 0.7%, its first decline on record. Ocado’s growth is now comparing against the rapid expansion it enjoyed in 2020 so it’s not altogether surprising that we’re now seeing a small dip. It’s still a positive outlook for the online specialist though. Ocado has retained 1.8% of total grocery sales, the same as last year, and sales are up by 44.4% compared with 2019, the fastest two-year growth in the market.

Other retailers, including Amazon, are continuing to explore online opportunities. Amazon announced this week that it will be adding its own branded groceries to its UK website, supplementing its existing tie up with Morrisons. This could bring its offer more in line with what we know about British shopping habits. The British public is among the most reliant in the world on retailer own label brands. Currently 11% of Amazon’s grocery sales are own label lines, well below the 50% market average.

If there’s one pandemic habit that has stuck it is perhaps that cash-free payment is now king – another trend Amazon has been trying to capitalise on. Across major grocery retailers, 87% of payments are now made by card rather than with cash.* As we shift to cashless payment methods, retailers have been looking to make purchasing as seamless as possible. Amazon launched its new ‘just walk out’ stores, while Tesco announced last week that it is preparing to introduce its first till-less shop, and we anticipate more retailers will follow suit.

Like-for-like grocery prices have been falling since April this year and the trend continued over this 12-week period as they dropped by 0.8%. However, the past four weeks paint a slightly different picture with inflation growing by 0.4%. Although relatively low, this four-week level of inflation would still add £19 to the average household’s annual grocery bill. It’s expected that inflation will rise again in the coming months, and as a result we’ll likely see shoppers seeking to tighten the purse strings and save where they can.

Waitrose was the only grocer to increase sales in the past 12 weeks, with growth of 0.6% as it attracted 365,000 more shoppers than it did last year. The retailer expanded its market share by 0.2 percentage points, up to 4.9%. Tesco’s share of grocery sales increased by 0.6 percentage points from 26.6% to 27.2%, its largest year-on-year share gain since 2007. Sales were bolstered by its premium ‘Finest’ range, which rose by £29 million.

Sainsbury’s share also nudged up by 0.3 percentage points to give it 15.2% of the market. Asda saw a 17% jump in the number of shopping trips compared with last year, now holding 14.2% of grocery sales. Meanwhile, Morrisons share dipped to 10.0%, with sales falling by 6.2% as they are measured against a strong performance last year.

Discount retailers Aldi and Lidl both gained market share. Aldi holds 8.2% of the market and Lidl 6.1%. Co-op and Iceland, two of the standout performers of the past 18 months, saw sales fall year on year. They now have market shares of 6.6% and 2.3% respectively.

*Worldpanel Plus data for the 12 weeks ending 27 June 2021, covering spend in grocery multiples.