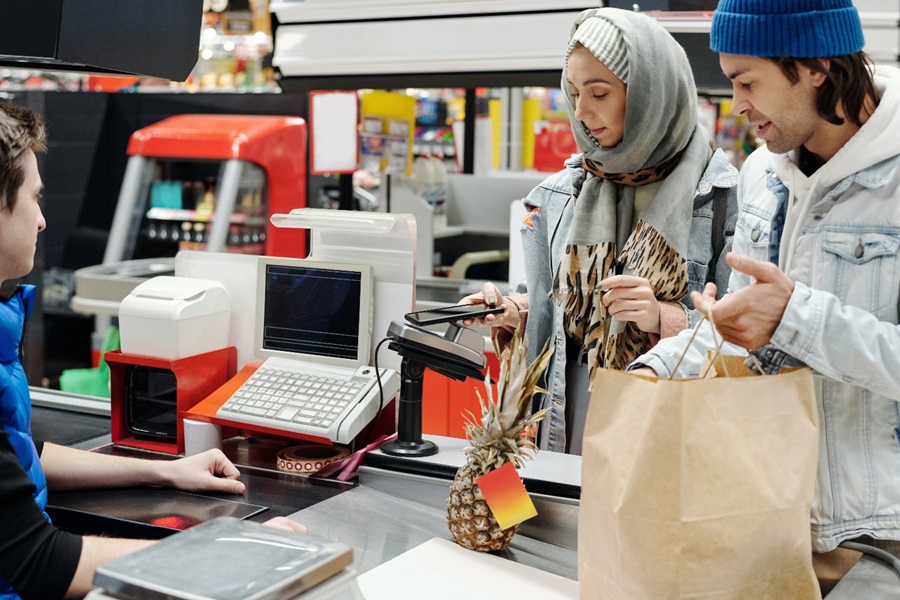 Supermarket sales rose by 2.2% in the 12 weeks to 7 August according to our latest take-home grocery figures. This is the fastest growth the industry has seen since April 2021 as the market continues its recovery post-pandemic, despite price inflation now challenging the sector.

The latest numbers come as grocery price inflation hits 11.6% over the past four weeks, the highest level since we first started tracking the data this way in 2008. As predicted, we’ve now hit a new peak in grocery price inflation, with products like butter, milk and poultry in particular seeing some of the biggest jumps. This rise means that the average annual shop is set to rise by a staggering £533, or £10.25 every week, if consumers buy the same products as they did last year.

It’s not surprising that we’re seeing shoppers make lifestyle changes to deal with the extra demands on their household budgets. Own-label ranges are at record levels of popularity, with sales rising by 7.3% and holding 51.6% of the market compared with branded products, the biggest share we’ve ever recorded.


Less than a quarter of sales on promotion

With inflation high and a potential recession later this year, comparisons against the last financial crisis are becoming visible. People are shopping around between the retailers to find the best value products, but back in 2008 there was much more of a reliance on promotions. It’s harder to hunt out these deals in 2022 – the number of products sold on promotion is at 24.7% for the four weeks to 7 August 2022, while 14 years ago it was at 30%. Instead, supermarkets are currently pointing shoppers towards their everyday low prices, value-ranges and price matches instead.

Over the past month we’ve really seen retailers expand and advertise their own value ranges across the store to reflect demand. Consumers are welcoming the different choices and options being made available to them on the shelves, with sales of own-label value products increasing by 19.7% this month. As an example, Asda’s Just Essentials line, which launched this summer, is already in 33% of its customers’ baskets. 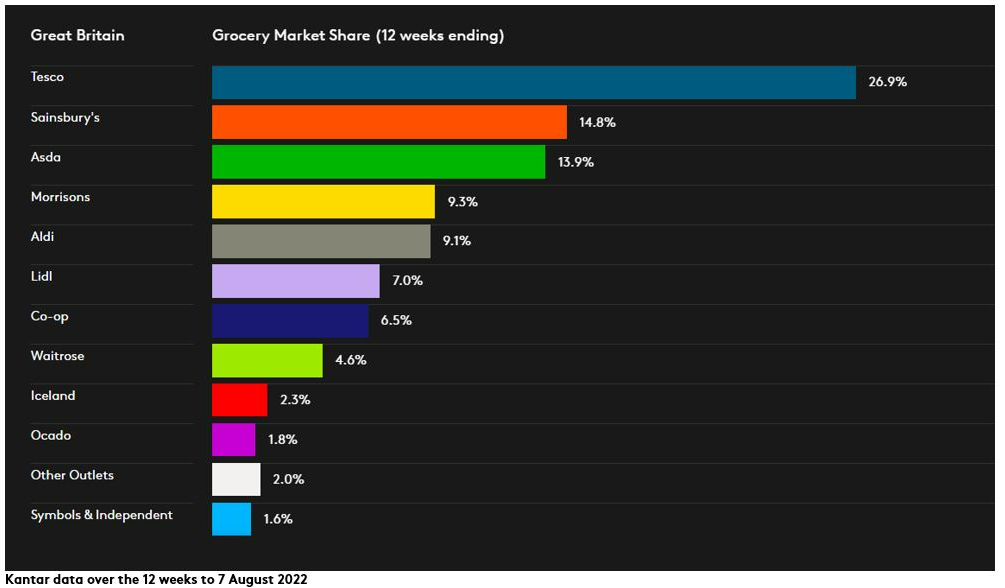 Lidl remains the fastest growing grocer, with sales up by 17.9% over the latest 12 weeks, raising its market share to 7%. Boosted by the popularity of its dairy goods and bakery lines, this is the retailer’s highest rate of growth since September 2017. Aldi also performed strongly, and its market share increased by 0.9 percentage points to 9.1%. Together Lidl and Aldi have gained 1.8 percent of British grocery sales over this period, representing a £2.3 billion annual shift in spending towards the discounters.

Annual footfall has continued to pick up in store while online shopping declines. Shoppers have made the most trips into store since March 2020. This is understandably impacting the online grocery market, and its total share has dropped to 11.8%. This is the first time online’s share has dipped below 12% since the early days of the pandemic in May 2020. Even so, 19% of the UK population still made an online order during the past four weeks, the equivalent to 5.4 million households.


Cooling down, home and away

Over the last month, the sun has shone in the wake of the England women’s Euros victory, and the record temperatures have had an impact on consumers’ baskets. As the mercury climbs, shoppers have turned to mineral water and soft drinks to cool off. Sales of both products are up by 23% and 10% respectively in the latest four weeks. Unsurprisingly, ice creams are also popular with 18% year on year growth, up by 4 percentage points on the previous month. Adapting to the changing temperatures, we’re expanding our summer wardrobes too, now that there are no restrictions on travel or going outside. Sales of clothes intended for summer holidays like shorts, sundresses, caps and swimming costumes, have increased by 163%*.

Asda returned to growth this period with its sales rising by 0.2% to take its market share to 13.9%. Meanwhile Tesco’s sales also increased by 1% and it has 26.9% of the market. Sainsbury’s and Morrisons shares stand at 14.8% and 9.3% respectively, while Waitrose holds 4.6% of the market.

Ocado bucked the overall online sales decline, growing by 6.2% as it attracted new shoppers outside its traditional demographic. Co-op’s sales rose by 0.4% giving it 6.5% of the market while Iceland’s grew by 2.8%.

Watch ()
Want more like this
Grocery prices continue to climb as Brits prepare for scorching summer heat
Shoppers turn to own label for shade as they face the heat of rising grocery inflation, now almost at a sizzling 10%.
UK grocery bills to rise by £380 per year but inflation fails to dampen jubilee joy
Despite grocery inflation hitting a decade-long high, sales during the week of the Platinum Jubilee were £87mn higher than on average in 2022.
Related solutions
Consumer Goods Panel
We monitor FMCG purchases and trends across all retail channels, through the biggest consumer panels globally.
Learn more
Out-of-Home Panel
Get useful insights and trends data from our consumer panels for food and beverages consumption and use outside of home.
Learn more
Food & Beverages Usage Panel
Understand what, how, when, where and why consumers are eating and drinking, to make good marketing decisions.
Learn more