The FMCG sector in Spain has grown 1% in the first three quarters of 2019, driven by a higher spend on fresh products. 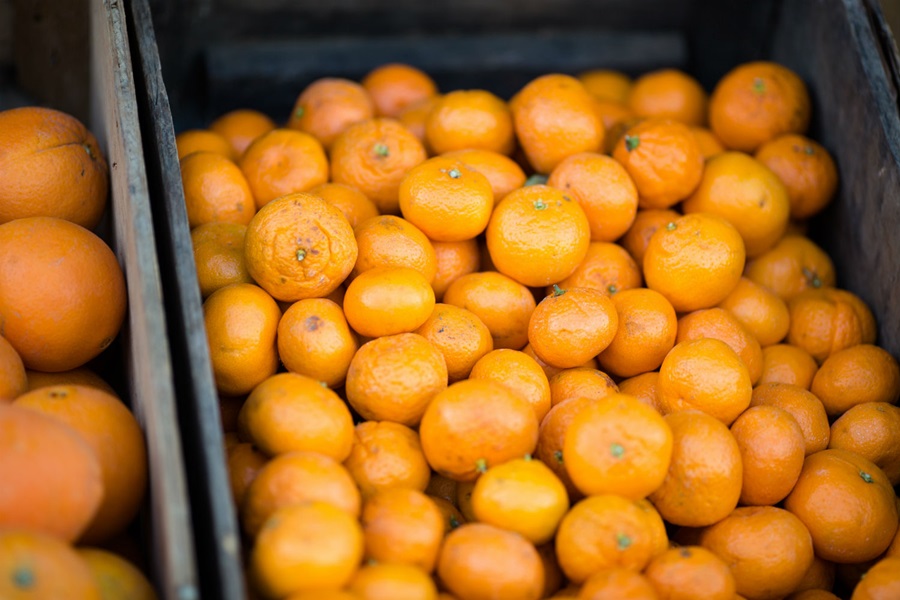 Get in touch
Consumer Shopper & RetailCPGSpain

The fast-moving consumer goods (FMCG) sector in Spain has grown 1% in the first three quarters of 2019, driven by a higher spend on fresh products, according to Kantar’s latest data. Although growing in value, the sector dropped in volume by 0.6% from January to September 2019. This increase in spending above volume is common to all sectors, especially in fresh produce, a category in which Spanish consumers have spent 1.9% more than last year, while demand has remained almost flat (+0.2%).

The decrease in the volume of packaged food consumed at home continues, dropping 1.1% in the last year and 2.2% since 2015. An increase in occasions for out-of-home consumption, leading to a growth in the restaurant and take-away channels, has offset these drops. The growth of products linked to a healthy diet, such as nuts and dried fruit stands out, with Spaniards spending 35% more on these products in 2019. Growth in organic food is a key trend in the market with spend growing around 20% this year.

Fresh products, representing almost half of spend for Spanish households, recovered from a 2% drop at the close of 2018 to become the driver of expenditure on FMCG. The search for higher quality products and more sophisticated varieties is the reason for this growth and, as an example, Spaniards have increased their spend on products such as seafood +9.5% and avocados +23.5%. Above all, this boost in spending on fresh products is due to the higher prices of the varieties that are most common in Spanish homes. Consumers are not giving up their basic products despite the slight price increases so the raises on products such as potatoes (20.7%), onions (21.3%) and eggs (+0.8%), translate into a 10% rise in the cost of making a home-made Spanish tortilla.

In this context, Mercadona is strengthening its position as the 2019 leader of Spanish FMCG achieving a 0.6 point increase in market share which means that they have 25.8% of the national market. The retailer is gaining ground in regions where it previously had less prominence such as Galicia and the Basque Country. It is also once more strengthening its commitment to own-brand products and to developing new products in the take-away food sector.

Despite Mercadona’s successful entry into the Portuguese market, where it already has five stores and now reaches 1 in 10 shoppers in the Porto area, it has not lost focus on its home market”.

Carrefour captured 8.7% of the market in 2019, gaining 0.3 points in share compared to the previous year. The focus on fresh products and organic food, the commitment to the environment with “Act for Food” campaigns, the opening of new stores - especially supermarkets, and the continuous development of its online channel, have all contributed to the French group’s success this year.

Despite a reduction in market share of 1.1% to 6.6%, Grupo DIA, remains the third most popular retailer in Spanish FMCG. With a significant reduction in the number of stores in 2019 and more still to close, as it pursues an in-depth restructure, the Spanish giant is expected to rebound in 2020.

The year-end appears very interesting, especially for the three largest national retail groups. Mercadona must consolidate its commitments in Portugal and in take-away food, which means leaving its comfort zone. Carrefour has had a change in its general management, and DIA finds itself in the middle of a restructure under the direction of its new board of directors. Therefore, we are expecting some movements among the FMCG giants in the last quarter of the year.

Lidl is already positioned as the fourth biggest national retailer, with the highest growth in market share (+0.7) in 2019, reaching a 5.5% total. Its success is characterised by its growth in market penetration as 6 out of 10 Spanish households have already shopped in Lidl in 2019, putting it in second place in terms of the number of buyers.

Eroski group (4.9% of market share) lost 0.5 points share during 2019. The Basque group’s core regions are those most affected by the increase in competition. In the Basque Country, Catalonia and Galicia, both the national and regional operators are increasing their presence, which is having repercussions on Eroski’s growth, despite maintaining a privileged position overall.

Meanwhile, Auchan (3.4%), remains in the top six and has a stable market share. They have reversed a previous downward trend while continuing the process of combining brands under the name Alcampo. They have also closed their least profitable stores and updated many own-brand products in an effort to recover the image and influence that the brand once had in Spain.

Regional supermarkets maintained their good historical record and achieved a market share of 12.2% (not including Eroski), collectively they are the second biggest national retailer. A growth of 0.4 points compared to 2018, demonstrates once more that Spanish consumers trust this type of supermarket, which maintain their growth and leadership position in various regions, despite the efforts of the big national retailers.

Ecommerce continues its ascent, rising 0.3 points to reach 1.9% of the FMCG market. This channel has the challenge of generating new shopping habits, something that is linked to fresh products. It continues to be used mainly for one-off purchases despite the increasingly wider options available.

In 2019 the consumer has had more options of where to shop. When it comes to choosing a retailer it is the fresh product offer that matters. This restricts the growth of online shopping, validates the regional supermarkets and is the true battleground for FMCG retailers. This, along with environmental concerns and demand for organic products, will define the final stretch of the year and the start of 2020. 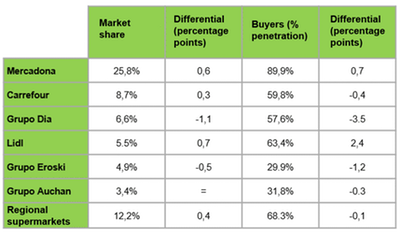