Lessons and reflections from the G7 countries during COVID-19

How can governments turn this unprecedented and constantly evolving crisis into an opportunity to reconnect with citizens?
Download the full journal Get in touch 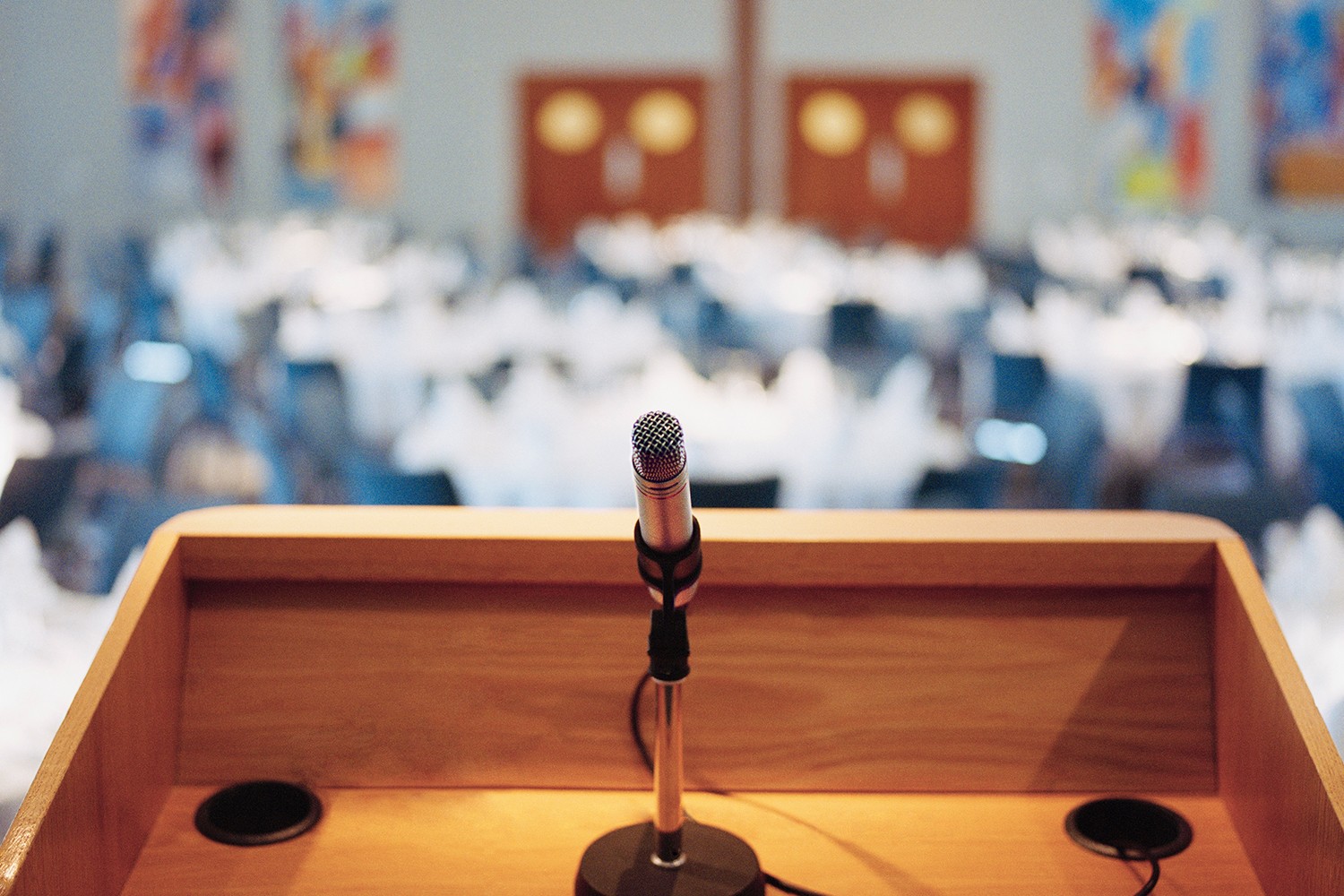 “Unprecedented” swiftly became the ‘nom du jour’ of the COVID-19 crisis, and for good reasons. The term has rarely been so applicable to what it is describing, as we faced this series of health, human, economic and ultimately, political challenges for which there was no precedent.

These were unprecedented times for governments and highlighted the crucial importance of remaining connected to, and aware of public opinion. It was – and still is – imperative that public policy designed to fight the pandemic was understood, accepted and executed effectively.

Kantar’s monitoring of public opinion of the impact of COVID-19 across the G7 countries has allowed us to compare very different situations in the face of a common enemy. It revealed the multiple difficulties presented by an unknown epidemic, which called for ‘unprecedented’ decision-making, which in itself had myriad consequences. Coherent action to gain people’s trust and change individual and collective behaviours was rapidly required, meaning this constantly evolving crisis represented a major challenge for policy and communications. Without the ability to be consistent in their decision-making, governments needed to be consistent in their principles and behaviour.

One of the characteristics of the COVID-19 crisis, as seen through the lens of public opinion, is that it was immediately understood to be a global crisis, a common global challenge for humanity, and an illustration of our interdependence.

This had also been the case with the financial crisis of 2008. However, while the sub-prime mortgage crisis impacted many people, its causes were more abstract and difficult to grasp, being attributed to the inaccessible and distant world of finance. With COVID-19, humanity was confronted with a much more familiar and concrete threat – disease. People quickly understood that it threatened everyone, everywhere.

In mid-March, the degree of concern was already very high (73% for one's health, and over 80% for the health of relatives and other people living in one’s country). This level of concern was similar across the G7 countries, despite the differences in the pandemic’s progress and the importance attributed to it by government and government’s communications. And remarkably, the level of concern expressed by citizens about the impact of COVID-19 on other countries was just as high. 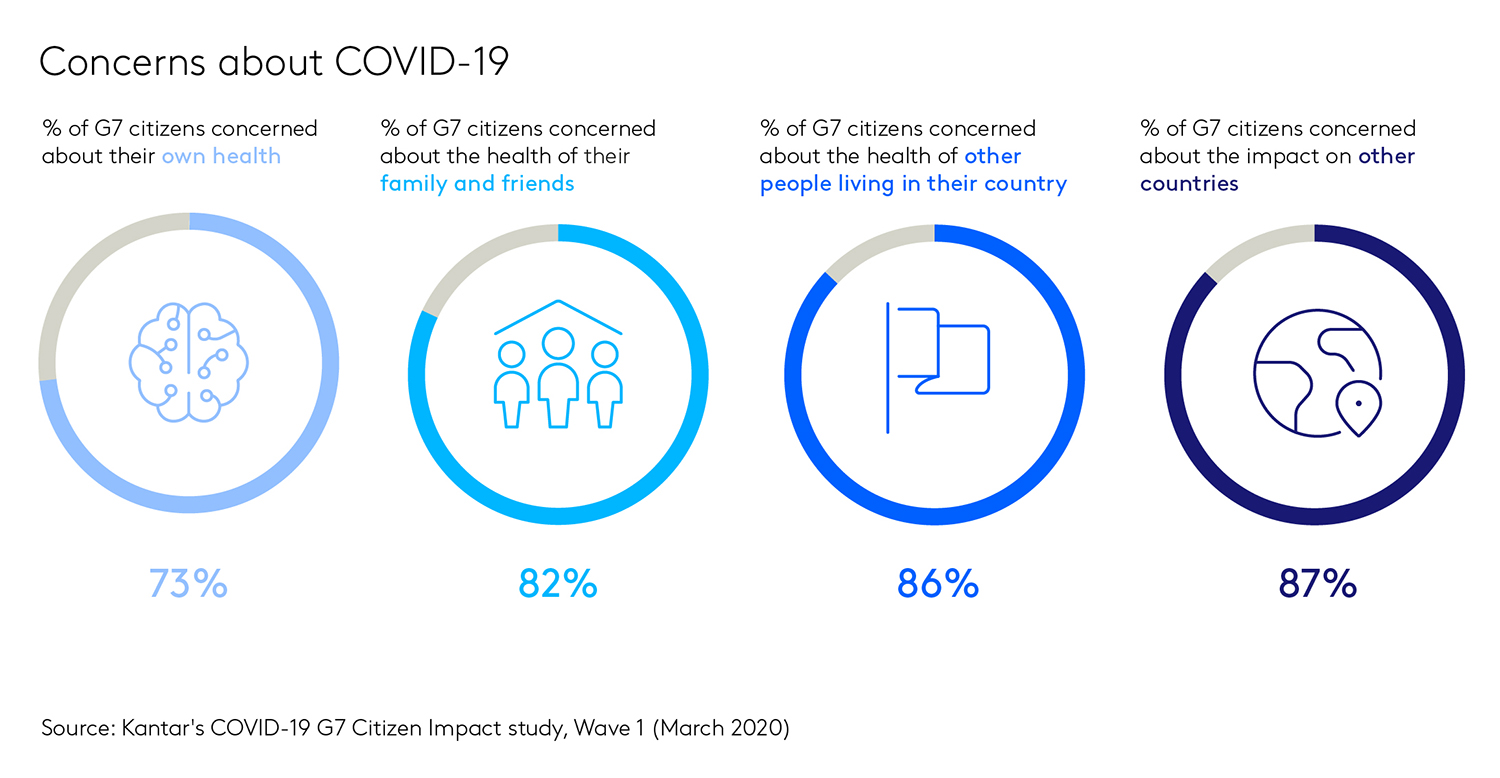 Realising they were facing a common crisis, people across the G7, and across the world, tracked the developments in other countries with great attention, as well as with shock and sympathy. As a result, political figures were directly compared to their counterparts in other countries and judged by the disease’s progress – not only on national soil but also in neighbouring countries. For instance, the harsh judgments of Japanese citizens of their government’s management of the pandemic were very much a consequence of South Korea and Taiwan’s successful outcomes.

Similarly, French citizens had a pretty good idea of how Angela Merkel, Donald Trump and Boris Johnson were performing as revealed in Kantar’s monthly political barometer in France. They chose to compare their situation with Germany’s, which was not to the French government’s advantage. 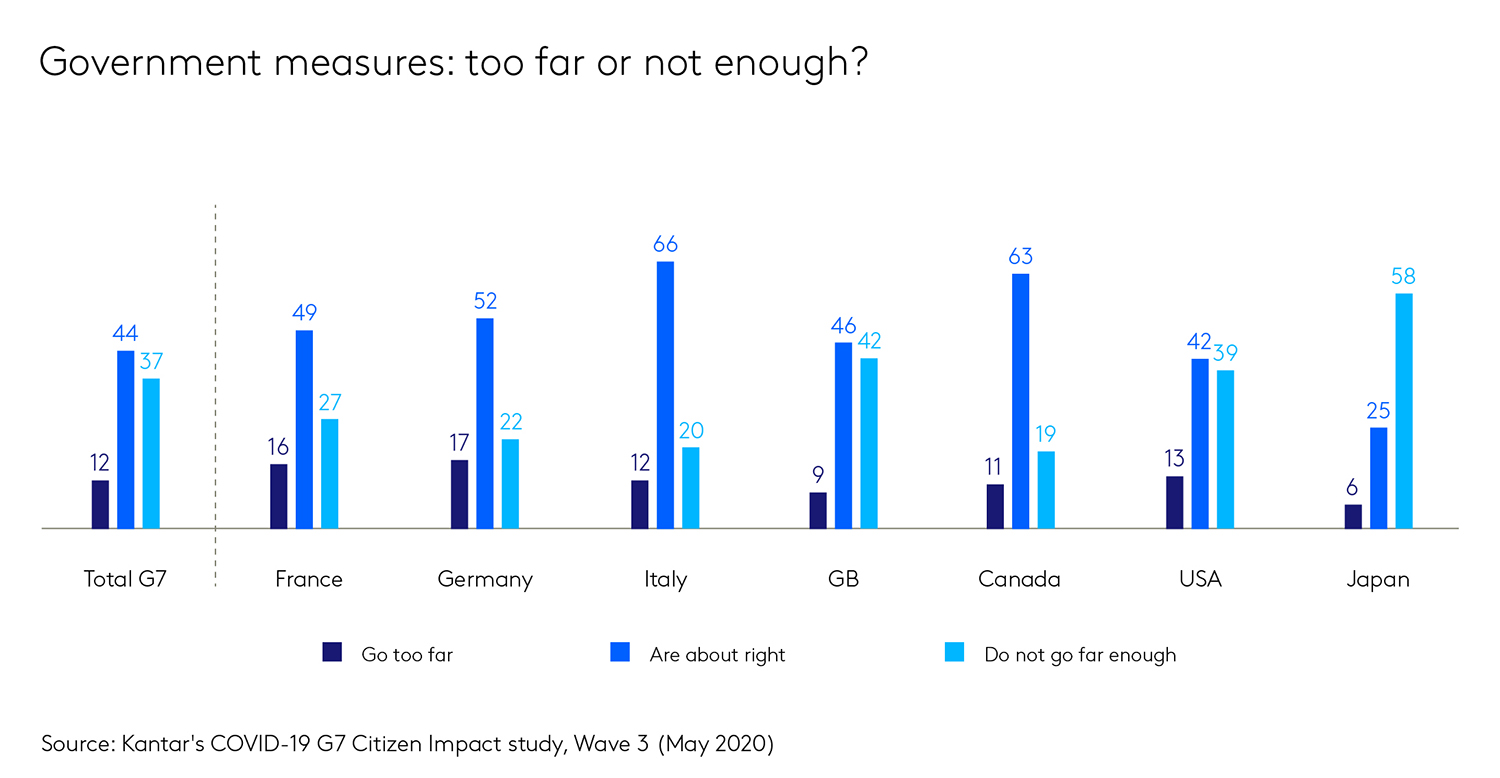 What lay behind the surprising acceptance of lockdown

This attention to the way events were unfolding in other countries also had the effect of increasing people’s acceptance of their own government’s decisions (‘priming’, from a behavioural point of view).

It is fair to assume that Italy’s example, being the first in Europe to enforce a lockdown, helped with compliance when other European countries made the same difficult decision. Indeed, the key takeaway from the first wave of our study in March was the high level of citizen support for the decisions taken by their government – a level of support not seen for years or in ‘peacetime’. Most of the G7 countries foster cultures which consider individual freedoms and rights as paramount.

Yet, exceptional measures to restrict these freedoms were deemed acceptable by a majority of citizens: between March and June, the proportion of G7 citizens who considered that their government measures were going too far, never exceeded 17%. 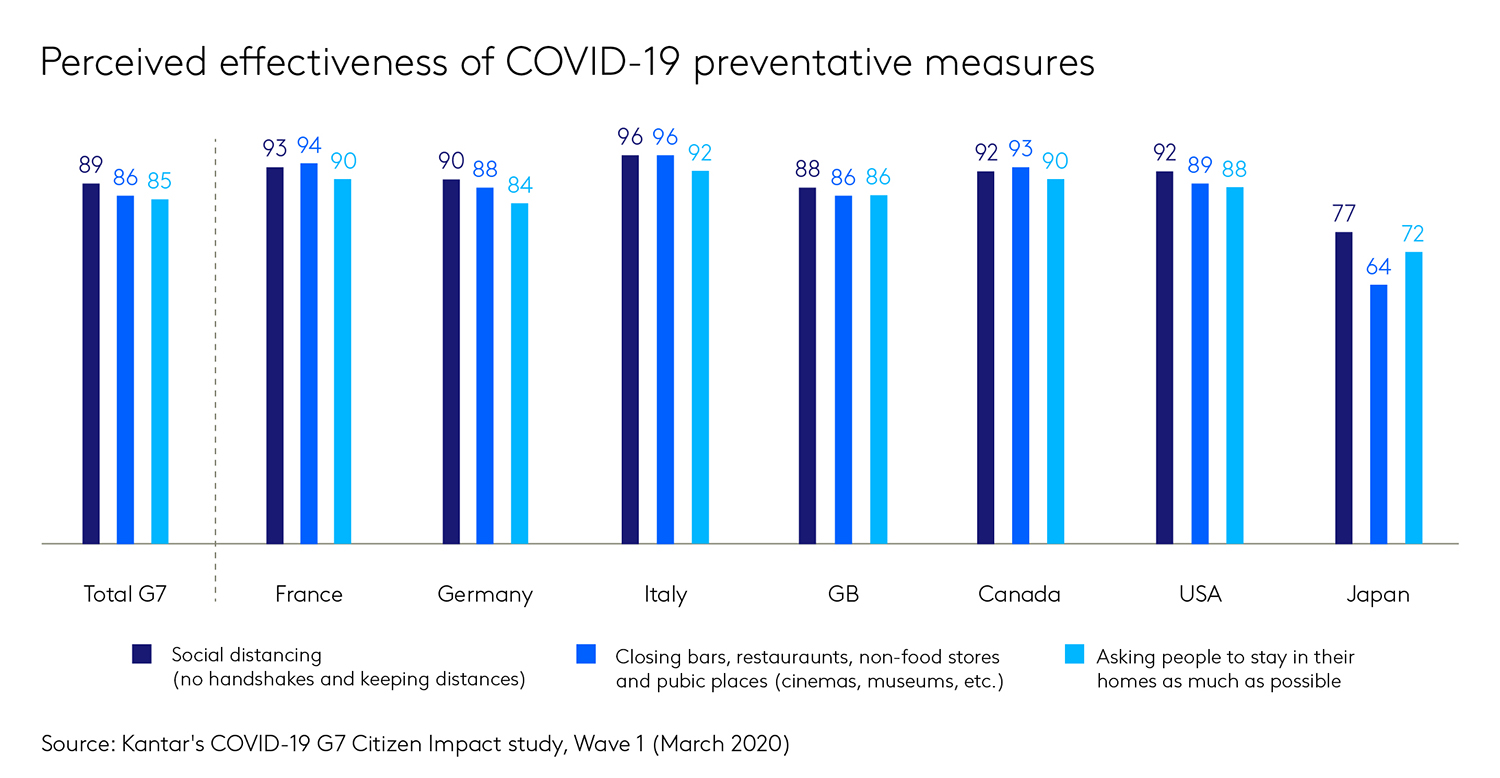 It was not only government messages that led to the acceptance of lockdown and restrictive measures, but the disease itself and the anxiety it triggered. The acceptance of the need to protect ourselves at the expense of our freedom was less the result of compliance, than the personal conviction that it was the right thing to do for the sake of our health and the health of those in our communities.

Our analysis shows that understanding of the disease’s severity among G7 citizens was informed more by the media rather than by governments. Television in particular – the ultimate media channel for emotive messages – helped embed the conviction that the severity of the crisis justified individual sacrifices. After television, alongside political and governmental sources (and far ahead of these in the case of the United States), doctors were the most trusted source of information, reaching the same level of trust as television by the end of May. In countries that have passed the peak of the pandemic, public opinion is now divided between those people who feel more confident and are therefore less vigilant and those who still fear infection and are struggling to return to normal life.

Governments now faced the challenge of developing an effective and consistent communication strategy. They needed to remind people of the much-needed precautions to be taken in everyday life, while at the same time encouraging a resumption of activity to protect the economy, and limit the negative social impacts of lockdown. To achieve this, they needed the media, and in particular, television, to raise awareness of the risks and call for solidarity; but they also needed the support of health professionals – the most powerful influencers of the behaviours that need to be adopted.