Supermarket sales fell year on year during the latest 12-week period, but remain higher than before the pandemic. What will a return to work and school do to shopping baskets? 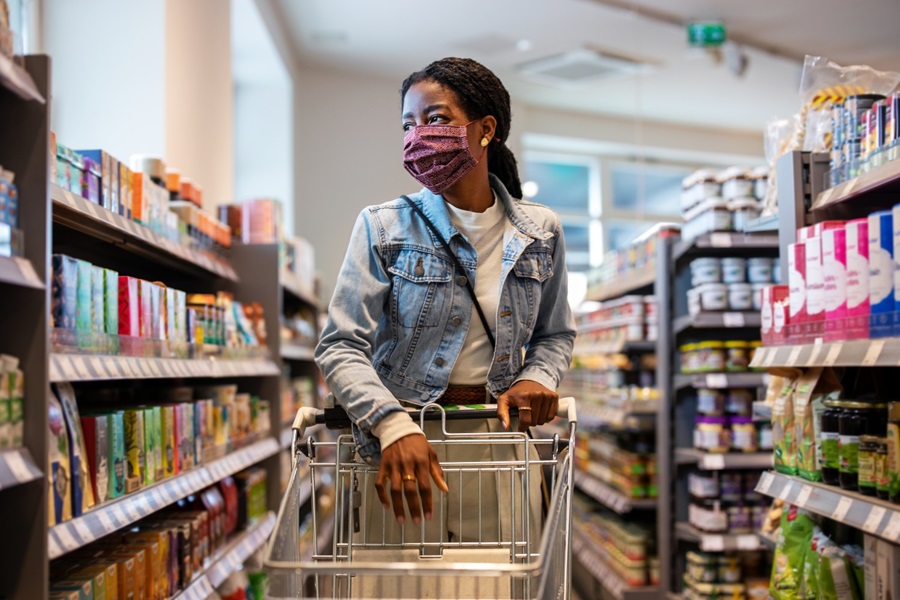 The latest take-home grocery figures from Kantar show sales fell year on year by 1.9% during the 12 weeks to 5 September 2021. Sales remain 8.7% higher than pre-COVID levels, reflecting that the impact of the pandemic is still being felt on the market. But with people set to return en masse to offices and schools in September, shopping habits are expected to change.

There are big lifestyle changes on the horizon with commuters heading back to the office and the return to school this autumn, and we’d expect this to impact how people shop. In the first week of September we measured the highest supermarket footfall all year outside of the Easter period, with more people out and about picking up items as they go. That suggests a hint of change, and could see shoppers shun the ‘big shop’ in favour of more frequent top-up buying. But we shouldn’t expect to shift from habits learned in lockdown straight back to pre-COVID patterns overnight. It’s most likely that the needle will settle somewhere in between.

We are already tracking signs of fatigue when it comes to home cooking. Sales of chilled ready meals, for example, increased by 11% this month as consumers’ lives get busier again. More people returning to towns and cities should also provide a boost for cafés and coffee shops, where spending last September was £187 million lower* than in 2019. We anticipate that a good amount of that lost cash should return to the high street this year, but that means it will move away from the grocery sector.

The trend away from large shops is already happening on digital platforms, with the average online shop now worth £78.28, nearly £17 less than its peak at the start of the pandemic. The market share of online grocery has fallen to 12.2% this month from 13% four weeks ago – the lowest level since May 2020 as people continue to move their spend back in-store.

Like-for-like grocery prices rose by 1.3% in the past four weeks compared to last year. For much of 2021 shoppers have been shielded from price increases, with more being sold on promotion this year compared to 2020. But in the past month only 27.5% of spending was done on deals. Other than the early days of lockdown last year, that is the lowest level recorded in the fifteen years that we have tracked this data, with retailers aiming to offer everyday low prices instead.

At a time when total market sales are contracting, Waitrose bucked the trend and found growth both online and in-store. With spend up by 2.2% in the past 12 weeks, it was the fastest growing supermarket for the second month in a row. As a result, Waitrose’s market share increased to 5.1%, a fifth consecutive increase which makes this its best run since September 2015. Tesco was the only other grocer to increase sales value year on year, up 0.2% on 2020. Performing better than the overall market meant Tesco also won share, gaining 0.5 percentage points to account for 27.3% of all sales.

There is change afoot for the rest of the big four. Private equity interest in Morrisons has been driven in part because it was the fastest growing of the four major retailers in 2020. But it has fallen back this year because of a tough comparison with the success of 12 months ago. Asda meanwhile is looking at its role in the convenience market and recently announced its intention to launch its new ‘On the move’ garage forecourt stores. There is huge opportunity in that sector to tap into the 3.7 billion take-home grocery trips of less than £20 made every year. Its market share now stands at 14.3%. Sainsbury’s has increased its market share this period, up by 0.1 percentage points to 15.0%.

Aldi’s share rose by 0.1 percentage points to 8.1%. It attracted more new shoppers though its doors than any other retailer this period, with an extra 612,000 households visiting in the past 12 weeks. Lidl has also made market share gains, up to 6.1%.

Iceland has seen its share fall in the past 12 weeks, to 2.3%. Ocado sales followed the online trend, also falling by 1.5% compared with a year ago. Its market share remains at 1.8%, the same as it has been since May. Co-op’s share declined this period and is now at 6.5%. Sales at symbols and independent stores fell by 17.2%, but are still elevated against the same time period in 2019.