A majority in the USA, UK, France Germany and Italy are ‘likely’ to take the coronavirus vaccine, but a much smaller percentage said they would ‘definitely’ take it... and the hesistancy is growing. 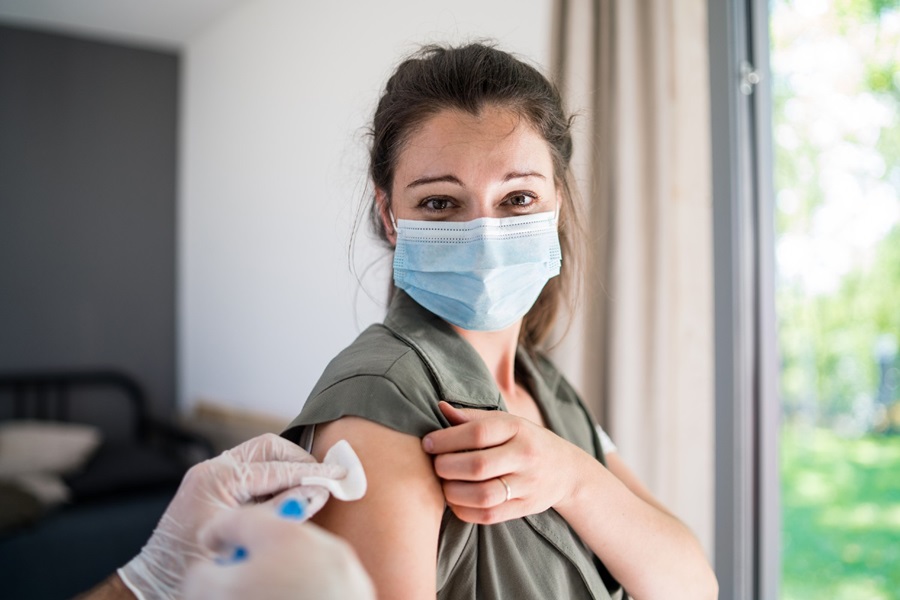 Only a minority of the public across major economies will ‘definitely’ take a vaccine for coronavirus when it becomes available, Kantar research has found. The study, conducted after a vaccine presenting as 90% effective in stage three clinical trials was announced by Pfizer, also indicates an increasing hesitancy among the general population to commit to any new vaccine.

Across the USA, UK, France Germany and Italy, the rate at which the public are committed to participating in vaccination efforts correlates to the rate at which the public strongly believe in the safety of vaccines in general. These findings present a major challenge for governments around the world aiming to control the COVID-19 pandemic and get their economies back on track in 2021.

A study of 1,000 nationally representative people each in the USA, UK, France Germany and Italy showed that while a majority of people an all countries are at least likely to take the vaccine, a much smaller percentage, ranging from just 21% in France to just 43% in the UK, said they would ‘definitely’ take the vaccine. Further, the hesitancy to take a vaccine had increased in every country since June 2020, when Kantar last asked the question. 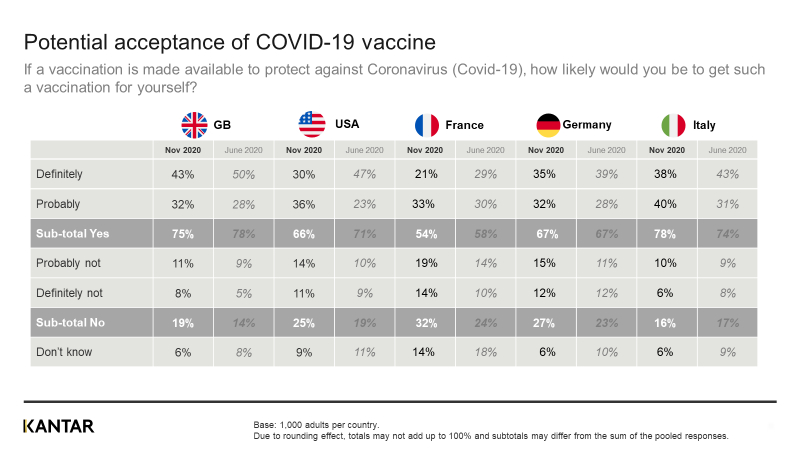 Across all five countries studied the percentage of individuals who say they would ‘definitely’ take a vaccine has fallen. The most precipitous fall is in the USA where those saying they would ‘definitely’ take a vaccine has fallen from 47% in June to just 30% at the end of last week. The growing hesitation about the vaccine seems to be linked to the conditions under which it was developed and tested. In 4 of the 5 countries a majority expressed concern about the safety of vaccines because of the speed with which they are developed and produced. This proportion rises to 69% in France. Germans express less concern (41%) than citizens of other countries. However, in addition to these 41%, 28% are unsure.

The findings are potentially alarming for governments around the world. When less than half the population of a nation say they will ‘definitely’ take a vaccine, this implies that governments will have a huge task ahead of them in building up trust in any approved vaccine, and in mobilising their nations to actually become inoculated. It is only those who are motivated who will proactively seek out the immunisation process. Everyone else will have to be persuaded, or the barriers to inoculation will have to be so low as to ensure that those saying that they will ‘probably’ take a vaccine actually end up being vaccinated.

All the governments in the countries included in our study will be drawing on the best of government communications capability and behaviour insight to ensure that they can implement their vaccination programmes to protect their citizens against COVID-19. But there are important differences between nations, as each manages different levels of citizen trust in policy and in the pharmaceutical sector. There is a long journey ahead on this.

Read: 3 in 4 Britons and 2 in 3 Americans are happy to receive COVID-19 vaccine