The future of finance: Deciding factors for mobile payment apps in APAC As online and app-based commerce rises across the globe, and notably in Asia-Pacific, so too is the popularity of online payment methods and consumer expectations of online banking. This shift follows the app-based interaction seen in many consumers. But, what does mobile payment usage really look like? And where is this taking off? Kantar's Lightspeed division undertook a research study amongst 2,100+ consumers across Hong Kong, China, Singapore, Australia, Taiwan and India to gauge;

Payment methods remain varied across most markets, with Taiwan respondents using the least variety in comparison to those in Singapore. In Australia, Singapore and Taiwan cash was reported to be the most utilized, whereas debit card usage was reported more favorably in India, and mobile payment apps ranked higher in China. 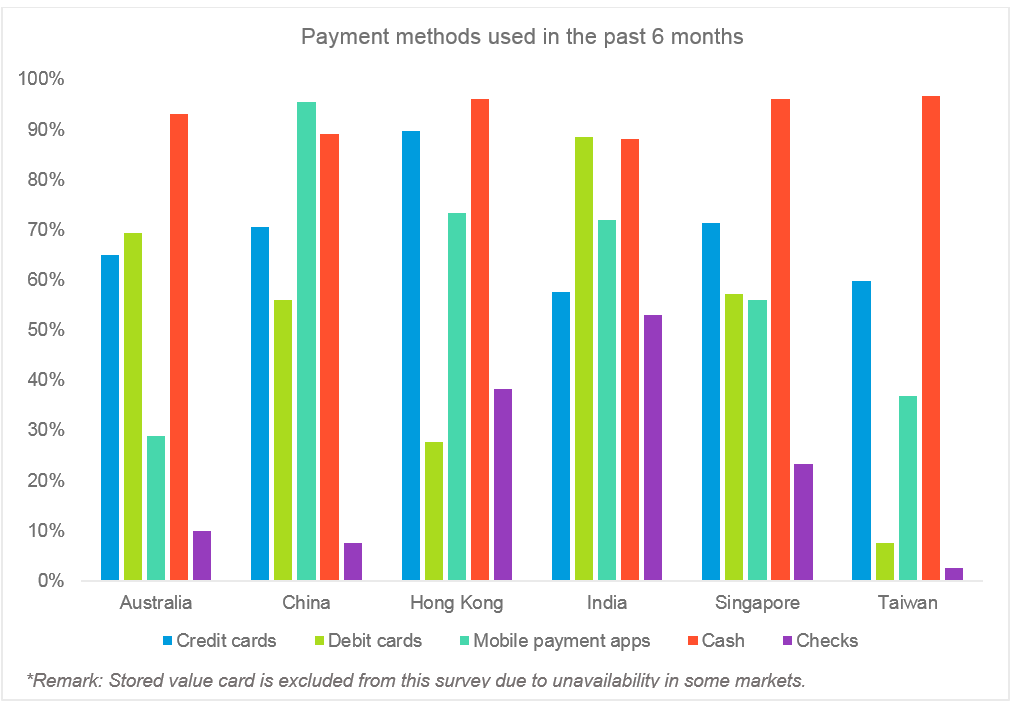 When looking at those payment methods used currently, cash was the most common in this sample of the APAC market. 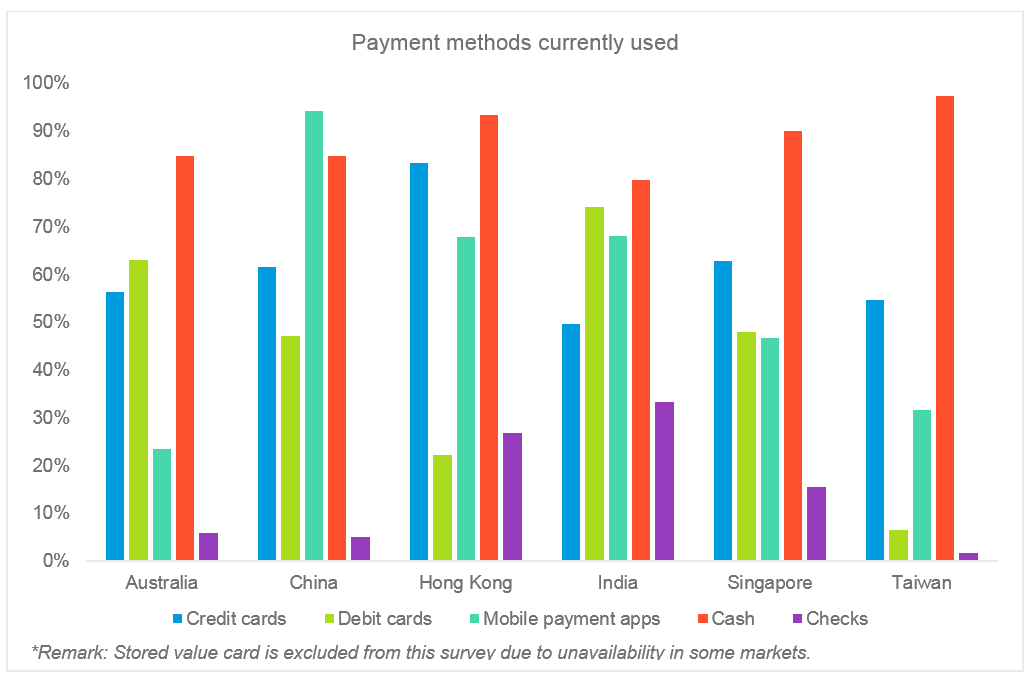 India and Hong Kong preference for mobile payment apps is higher, whilst China is still well ahead

When looking at which payment methods respondents preferred, mobile payment apps were rated as the highest option in China (85%), significantly beyond the other markets and payment methods. India's respondents also showed preference to mobile payment apps. For Hong Kong and Australia respondents, who reported to utilizing cash most commonly currently and in the last 6 months, indicated a lower preference for this method. 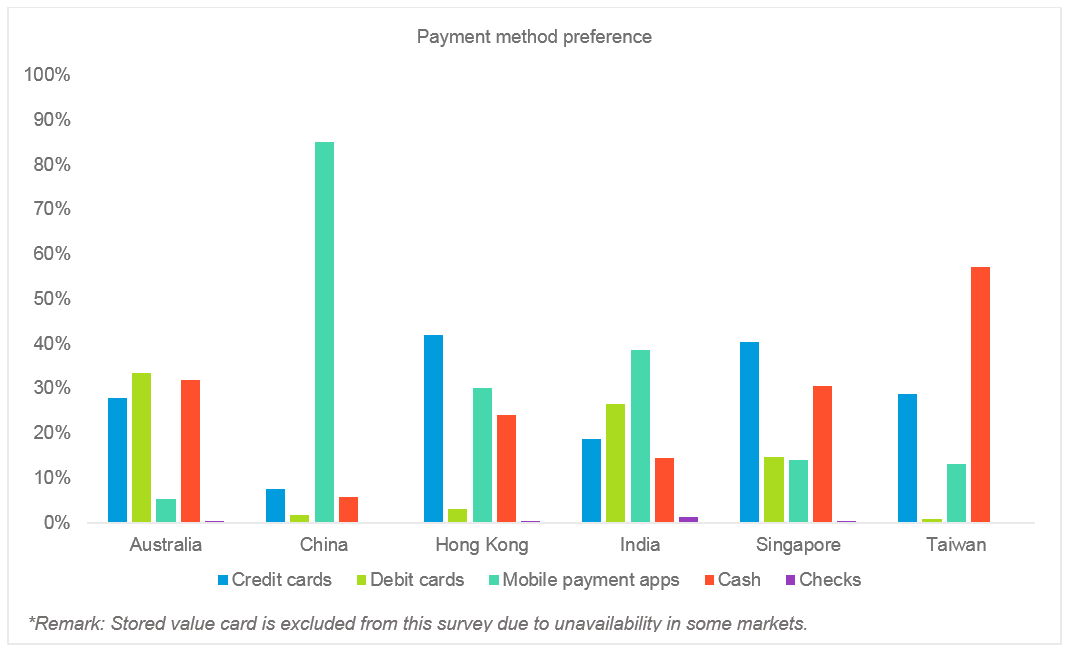 Whilst there were stark country differences, the appeal of all methods were closely matched across male and female respondents. Interestingly, we find Gen Z reported to prefer cash (60%), whilst Gen Y favored mobile payment apps (32%). Credit cards were reported as most favorable for age 39 and up. 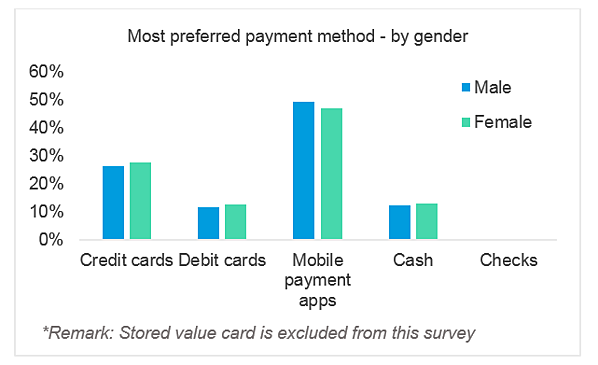 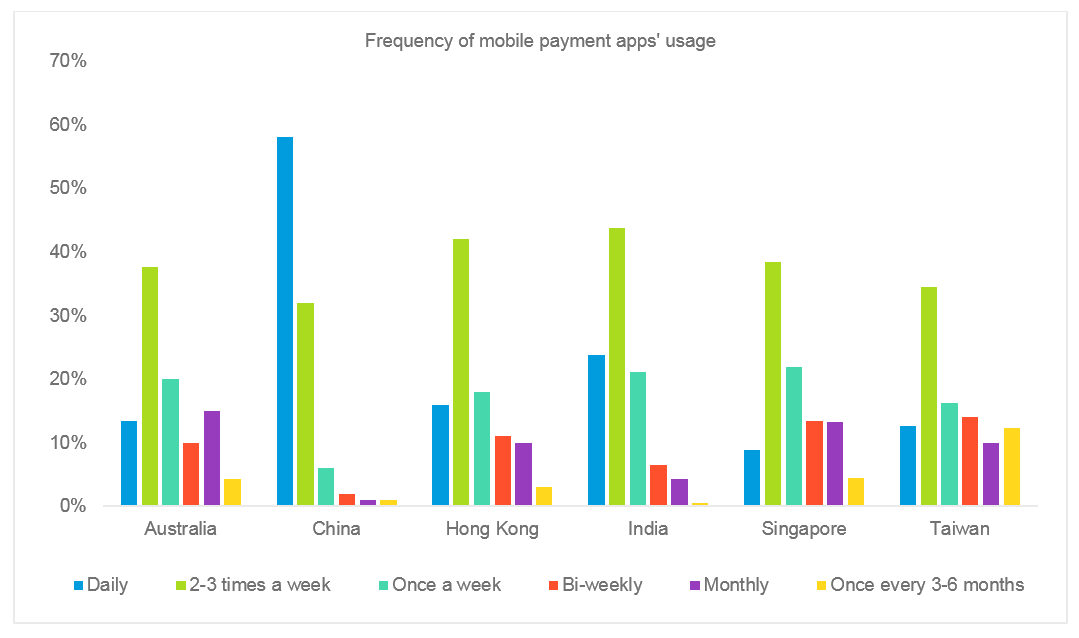 Delving deeper into mobile payment apps, the findings indicate that a convenient and fast checkout experience is the main usage driver for all markets. Results showed that 87% of all respondents agreed or strongly agreed that mobile payment apps are convenient and easy to use, where 75% stated it made carrying a wallet irrelevant. 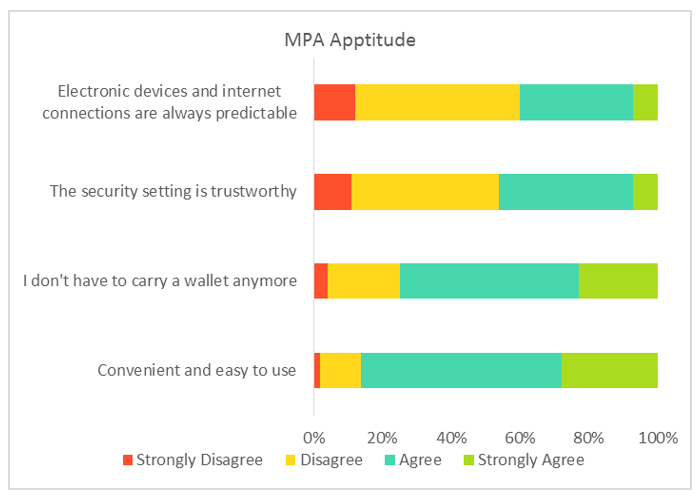 A lack of availability shows opportunity in the Asian Tigers, whilst connection drop is the biggest challenge felt for other markets

Regarding the challenges felt by consumers when using mobile payment apps, Australian respondents (36%) and Chinese respondents (34%) reported to not having concerns. For most other markets, however, concerns included the loss of internet connections (India 51%, China 36%) and a lack of option at their stores of choice (Taiwan 61%, Singapore 50%, Hong Kong 45%). The link between availability shows an area of opportunity to build the keen markets further. Looking at the ‘why’ behind the ‘buy-in’, the demand for better security was highlighted by all markets (except Australia) as the number one hurdle of conversion. A full breakdown can be found below. 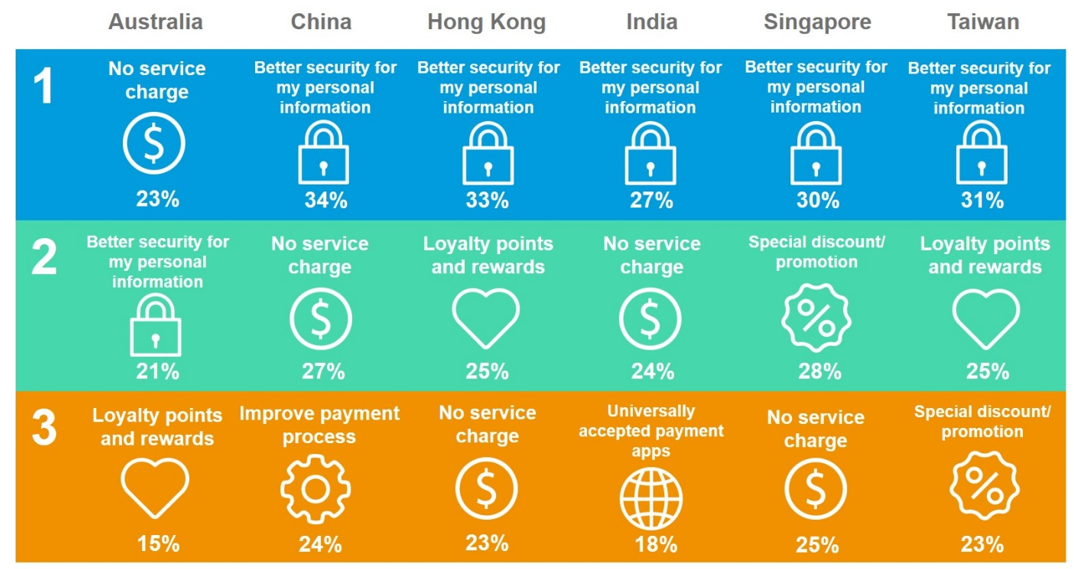 Paypal is the most well-known mobile payment app for all of Asia-Pacific, apart from China

Whilst there are obvious local players appearing in the brand awareness rankings, PayPal is consistent in the top 3 for all markets in the region, with exception of China. Alipay ranked first here, as well as in Hong Kong. In summary, the way in which consumers across Asia-Pacific are paying for goods is changing and could shift further to mobile payment apps in the near future. However, the rate at which this is happening varies across markets, with China being the most advanced at present and Australia arguably lagging behind. Motivations and concerns have some common ground, but face differences. The most notable in this study were security and convenience, two common themes in today’s culture. Consumers want conveniences at their fingertips, but need to know their personal data is safe and secured. As new entrants in the mobile payment apps arena appear, the more potential there will be for expanded use in the coming years.