Rise in spend slows to 2.8% in the first quarter with small supermarkets and short-video platforms the standout channels. 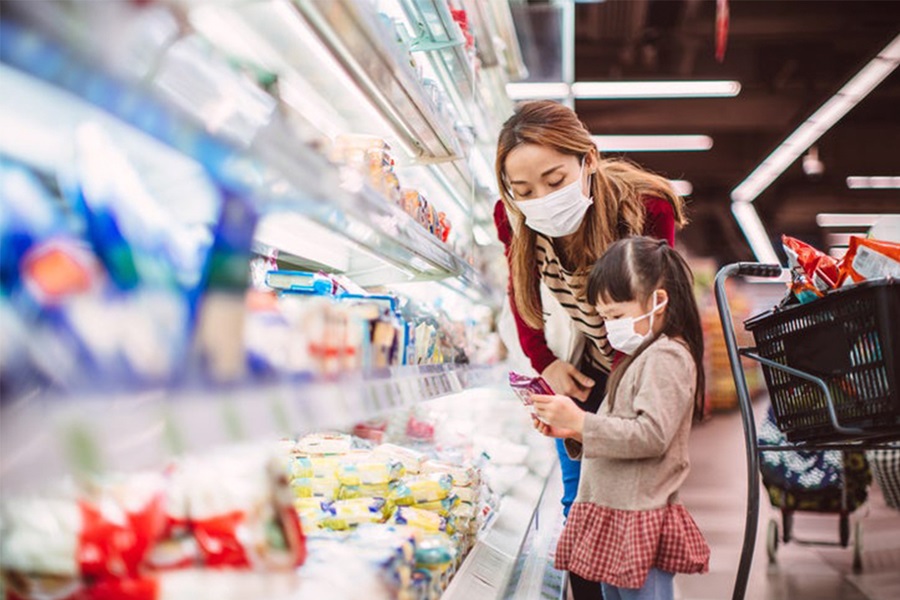 The first eight weeks of the year is one of the most important periods for FMCG consumption in Mainland China, as this period covers the Chinese New Year celebrations. Kantar Worldpanel’s latest data reveal that the FMCG market value grew 3% year-on-year during that time, compared with the same period in 2021. This trend was echoed in the latest government statistics, which reported a 6.7% increase in the retail sales of consumer goods for the first two months of 2022*.

However, the COVID-19 outbreaks which hit Mainland China at the start of the year restricted family visits and mobility – and the effects of this on the FMCG market are evident. If we look at the full 12 weeks to February 25, we see that consumer spend increased by 2.8%, representing a slightly weaker performance compared with the first eight weeks.

Within the modern trade channels, spending in small/mini supermarkets increased the most during the last 12 weeks, with a value gain of 9.3%. Received Gifts, a popular form of hospitality, recovered slightly due to the New Year festivities. The channel contributed 19.2% of the total market value, which is one percentage point higher than the previous year. Ecommerce growth continued to slow down during the last 12 weeks, with an increase of 6.9% in spend, as deliveries were impacted by the holiday break and capacity constraints.

Among the major retailers, Yonghui Superstores kept its value share stable at 5.5%. The retailer’s latest trade update also reveals a 1.6% increase in January and February, as it steadily drove its omnichannel integration and operational efficiency. Wal-Mart and SPAR also retained their shares of 5.1% and 1.7%, respectively. In contrast, Sun Art Retail Group lost 0.5% of its share of spend compared to the same period last year.

Growth in FMCG purchasing via ecommerce

Over the past 12 weeks, we’ve witnessed strong growth in FMCG purchasing via ecommerce channels in key cities and counties within Mainland China. Growth was fuelled by increases in penetration and frequency. This suggests that people in large cities and lower-tier cities were staying at home during the New Year season, and ordering festive goods from digital channels.

Within the ecommerce platforms, Alibaba Group retained its market leading penetration of over 49% with its ‘No-Close Spring Festival’ campaign. JD Group increased its penetration by 1.2 percentage points and Gross Merchandise Value (GMV) by more than 50%. This was driven by its sponsorship of the Chinese state broadcaster CCTV’s Spring Festival Gala, combined with further investment in delivery capacity **.

The rise of short-video platforms 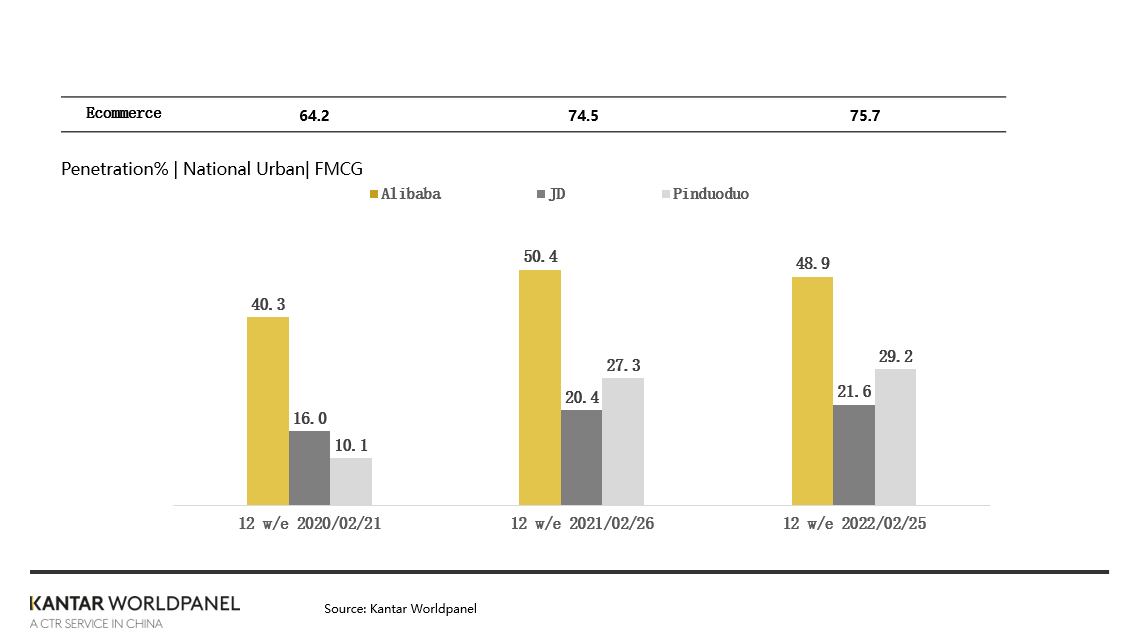 Kantar Worldpanel’s data reveals that 12.5% of all urban households in Mainland China ordered FMCG products via Douyin, a popular short-video sharing platform, over the past 12 weeks. Popular online marketplace Pinduoduo has increased its penetration to 29.2% of Mainland’s China population, up from 10.1% in 2020. The mobile-only platform has accelerated its investment in short-video capabilities and upgraded its portal by adding short-video to the front loading page, in order to enhance conversion through a more content-based strategy.

The eye-catching performances delivered by Mainland’s China short-video marketing platforms demonstrates the high potential they have to reach new consumers and grow sales. This channel is one to watch.

Reach out to our experts for more insights and access our data visualisation tool to explore current and historical grocery market data for your region.

Get in touch
Related solutions:
Consumer Goods Panel
We monitor FMCG purchases and trends across all retail channels, through the biggest consumer panels globally.
Learn more