The total spend of fast moving consumer goods (FMCG) recorded a drop of 6.7% in the 12 weeks to 20 March. 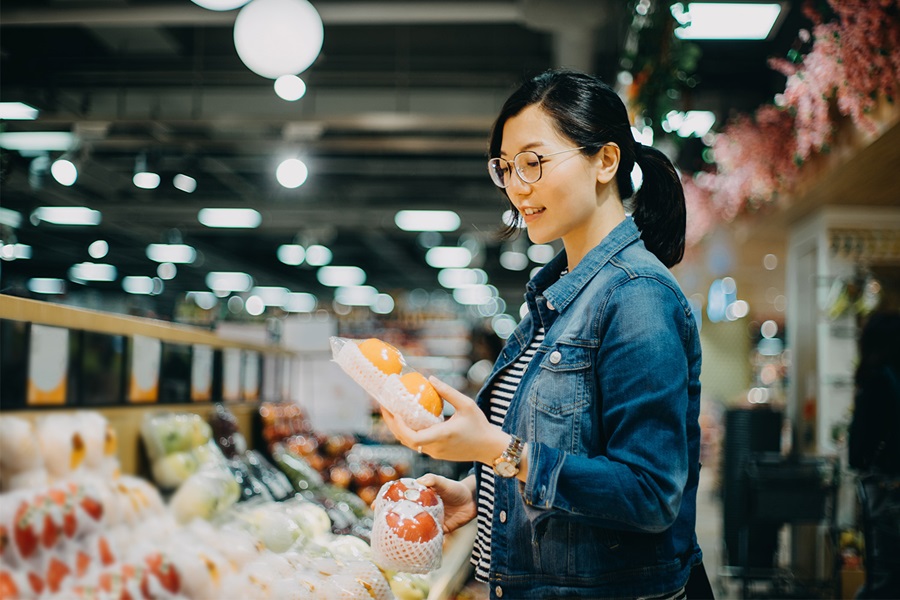 Get in touch
Consumer Shopper & RetailCPGCoronavirusChina

Kantar Worldpanel research shows that the total spend of fast moving consumer goods (FMCG) recorded a drop of 6.7% in the latest 12 weeks (to 20 March), compared to the same period in 2019.

According to the latest official statistics, China's retail sales of consumer goods declined 19% year on year in the first quarter of this year. The food category dropped 7.7% as the confectionery and beverage sectors suffered substantial losses during Chinese New Year and the subsequent lockdown period. Against the backdrop of a declining FMCG market, the household products sector bucked the trend with a value increase of 7.4%. It’s worth noting that the total FMCG market began recovering seven weeks after new infection cases eased (w/c 13th March). Younger consumers, who were leading the market growth in the past years, as well as consumers from the western region were more resilient during this period. Further recovery is anticipated though the pattern of this recovery varies by sector. 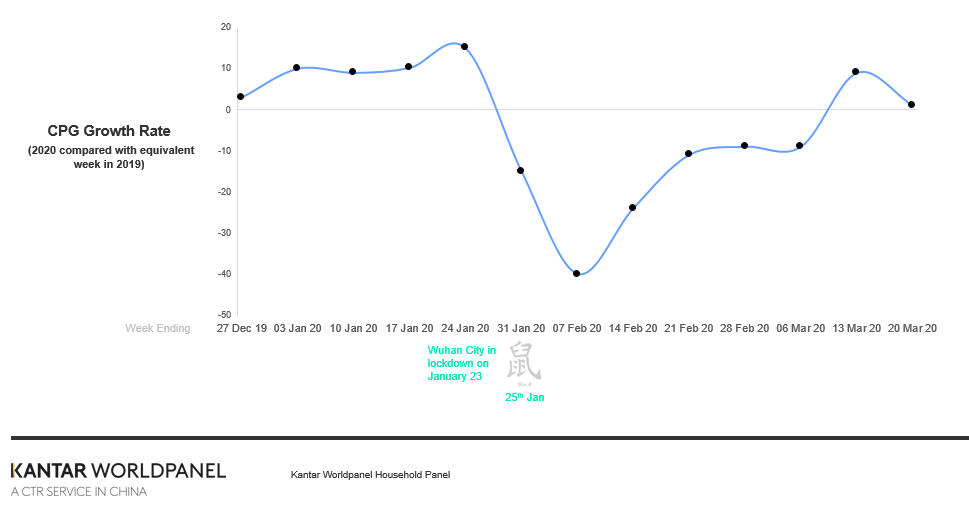 Modern trade (including hypermarkets, supermarkets, and convenience stores) fell by 3.7% in the 12 weeks to 20 March compared with last year, among which supermarkets were the least affected by the COVID-19 outbreak, reporting only a slight decrease of 0.5%. Small/mini supermarkets saw robust growth of 13.5% as they are nearer to the homes of consumers needing to make a top-up of daily necessities. Hypermarkets struggled during Q1 experiencing a penetration loss of 3.7ppts versus the same period last year, as cautious shoppers tried to stay away from shopping malls and crowds.

Ecommerce on the other hand reported a stellar performance with a growth rate of 22%, despite challenges in logistics as a result of road shutdowns and shortages of both staff and supplies amid the coronavirus outbreak. Ecommerce now accounts for 19% of the total FMCG spend and is expected to continue to grow in 2020.

Challenged by the unprecedented loss of physical shopper traffic during the past few months, modern trade retailers strived to utilise delivery services to supply fresh foods and groceries to meet the rising demand of self-isolation. Those who withstood the disruption of the coronavirus outbreak and even grew the number of shoppers were those who were able to offer fast and efficient delivery services.

Amongst the top players, Sun Art maintained a steady position thanks to its strong integration with the Taoxianda platform under Alibaba. Over 2019, the Sun Art group accelerated its transformation of the traditional hypermarket format to make the stores smaller and digitally strong to meet shopper needs. RT-mart also actively leveraged community group purchasing apps as well as its own delivery platform “Youxian’ to maintain its service during Q1.

In contrast to the lukewarm performance of its peers, Yonghui maintained a staggering growth of 9.8% in the first quarter, driven by its strength in fresh foods supplies and recent expansion to smaller ‘mini’ formats to build advantage in proximity. At the same time, local giants such as Wumart and Bubugao continue to grow faster than total market, thanks to their well-managed supply capabilities and membership building as a result of regional focus. Regional retailers are also rapidly adopting livestream-based platforms to attract shoppers while consumers desire to shop in an interactive way.

In the 12 weeks ending 20 March 2020, 62.6% of Chinese urban households bought FMCG online, up by 8.2ppt versus the same period last year. The consumption potential of lower-tier cities drove the growth of ecommerce, recording a 23.3% value growth with increasing purchase frequency. 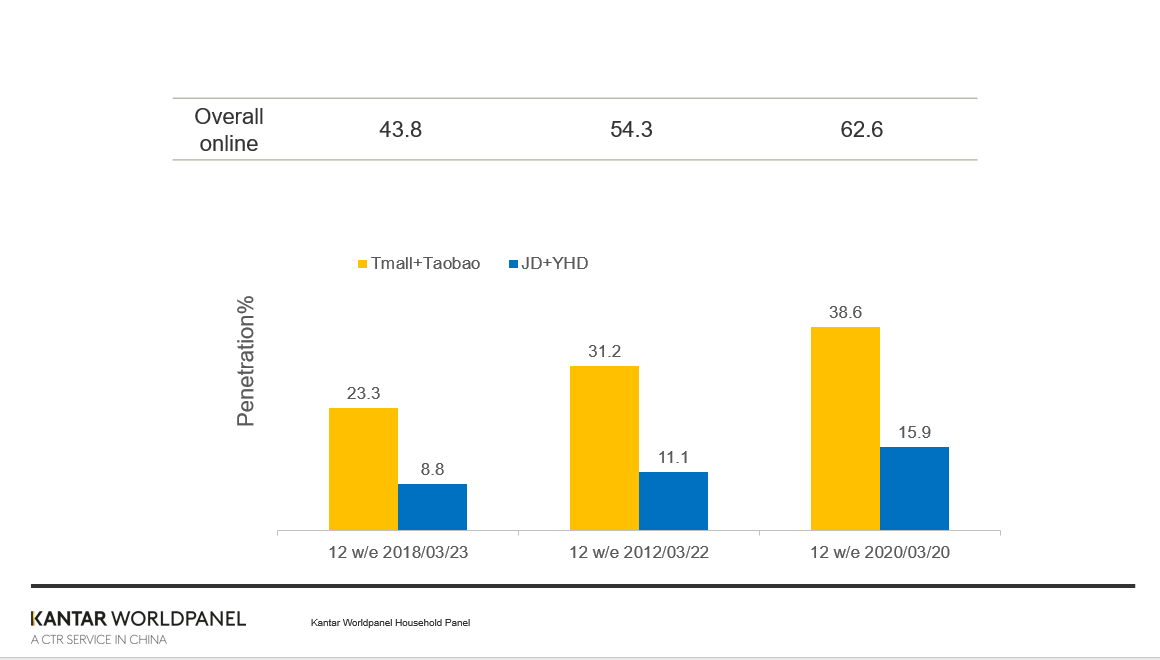 In Q1 2020, both Alibaba and JD demonstrated a staggering momentum. Alibaba reached a significant uplift on penetration of 7.4ppts, accounting for 38.6% of the market. JD followed the growing trend with a penetration increase of 4.8ppts.

Despite the pandemic, ecommerce players continued launching grand shopping events, such as “Queen’s Day” (a transformation of international women’s day) this year, likely the largest one in the last four years. This year brands continued to establish a theme of empowering women, whilst further stimulating consumption by meeting the pampering moments of women, especially after this difficult time. For personal care manufacturers it becomes more crucial to understand how to embrace the new growth in the post COVID-19 era.

Meanwhile, as the demand for convenience and instant gratification surged, O2O players (including retailers’ own delivery platforms, JD Daojia, Hema App, Ele.me, etc.) managed to boom rapidly in first quarter. In the 12 weeks to 20 March, 35% of urban families in China purchased at least once food category via O2O platforms.