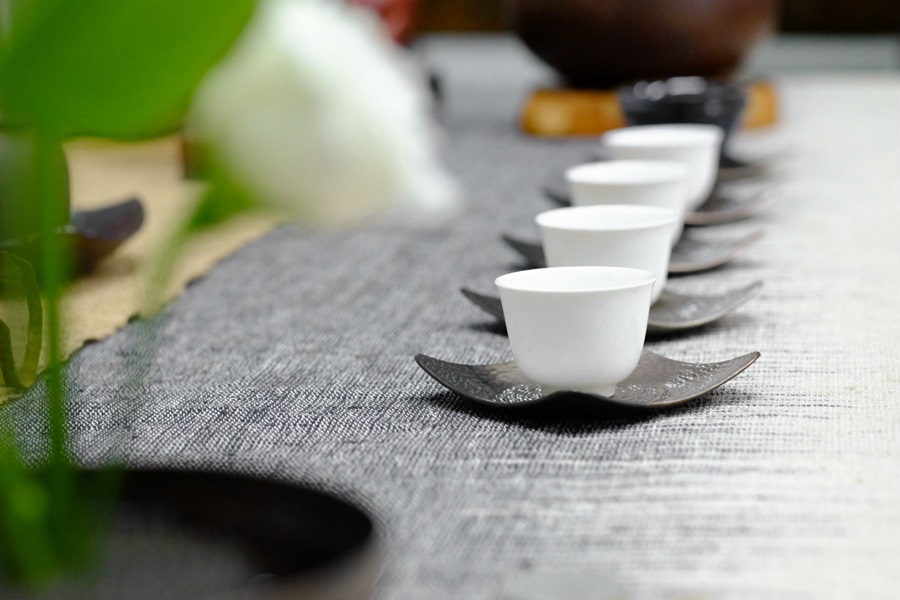 The latest data from Kantar Worldpanel shows that spend in fast moving consumer goods (FMCG) in urban China grew by 5.3% in 2019, up by 0.2ppt compared to the previous year. Despite slower economic growth and trade tension with the US, retail sales growth released by the government maintained at 8%, amid rising inflation of 2.9% driven by fresh foods. On another note, per capita GDP crossed the $10,000 mark for the first time in 2019, indicating the continued development and growth of China’s economy.

Packaged food consumed at home continues to see a slowdown in growth, reporting 3.1% in Q4 2019 and 2.5% in 2019. However, categories with health and wellbeing benefits continue to outpace the market. Homecare categories and personal care categories maintained a strong performance, reporting 8% and 11.5% growth respectively in 2019, driven by the desire of younger consumers to upgrade their lifestyles.

Across all regions and city tiers, the west region and prefecture level cities were up by 6.7% and 5.9% respectively. Modern trade (including hypermarkets, supermarkets, and convenience stores) grew by 1.1%, 1.2 points lower than 2018, with hypermarkets and large supermarkets driving the slowdown in growth. Ecommerce continued to record a staggering 36.2% growth in FMCG, with 78% of Chinese urban families purchasing FMCG online at least once over the year with an average frequency of 14.5 times in past one year. 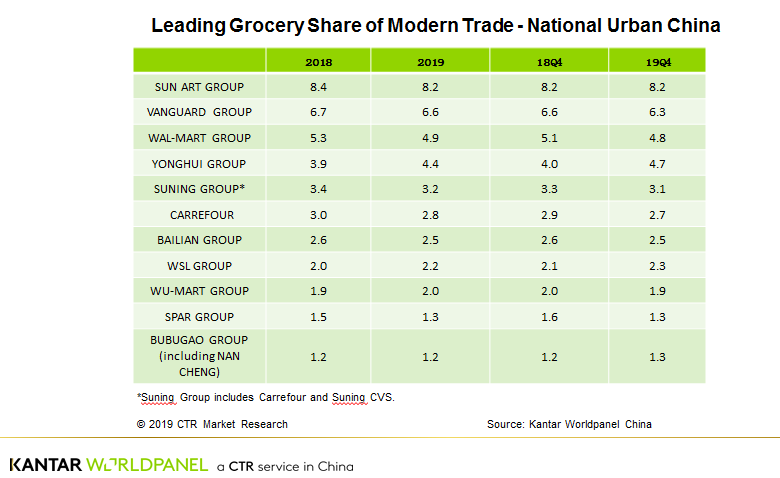 The outbreak of novel coronavirus in January 2020 is set to pose severe uncertainties and challenges to the growth in 2020. With 14,489 infection cases confirmed as of Feb 1st 2020, the resulting decline in retail traffic as well as forced store closures will negatively impact retail sales in Q1. The epidemic will also strengthen the position of ecommerce and delivery services, especially in fresh foods, as consumers try to avoid traditional wet markets.

1. Big players expect to recover as they embrace digital transform and diversify their operation model

Despite reduced footfalls for hypermarket retailers, they are actively embracing digital transformation and adopting new store formats and operation models to grow. Both RT-mart and Walmart have remodeled their stores, adding features such as self-service facial recognition checkouts. They are also leveraging multi-format strategies to bring customers convenience and freshness aside from value. The tie-up with e-commerce players such as Alibaba and JD also helped hypermarkets to tap into a growing appetite for fresh groceries and speedy delivery services. However, it is critical for the big players to make sure they get their value proposition and fundamental offer right. The success of Costco’s opening in China suggests that Chinese shoppers are willing to shop in big box retailers if they are able to offer quality products with a strong value appeal.

2. Step up the O2O service to enhance customer experience

Loss in footfall is a common challenge for bricks-and-mortar stores, as a result winning consumers’ attention and driving basket size is the key to growth. With enhanced infrastructure and technology, Chinese consumers expect to buy their groceries anytime and from anywhere. The O2O delivery service has already become an integrated part of the retail offer, regardless whether they are a big or small player, hence the quality of service as well as the digital experience will differentiate winners from the rest. The market will be increasingly dominated by a handful players, such as JD.com, Ele.me, Meituan as well as third-party players such as Dmall. Delivery services are expected to reach a new penetration high with the concern of coronavirus in Q1.

Continuously rising store rental and labor costs along with strong consumer demand for convenient shopping experiences have demanded that stores generate higher sales per square meter and more straightforward layouts for their customers. In 2019 most large players have launched new small formats, such as Yonghui Mini and Walmart Huixuan to get closer to shoppers and meet their daily needs. Yet the speed of expansion should go hand in hand with the retailer’s unique selling proposition. For example, Suning is transforming its convenience stores as one-stop shop for both daily necessities and services including coffee, printing services, utility payments etc. This helps drive traffic and gives Suning a chance to up-sell to customers on higher-margin services.

Local retail giants have intensified their M&A activities to expand their presence across different retail formats and areas. The regional champion, Wu-mart has made active acquisitions over the past two years. These include taking a controlling stake of 55% in the Chongqing Department store together with Bugugao in June and a 80% stake in Metro in October. The top 10 bricks and mortar retailers in China in 2019 only took up less than a 60% share of modern trade, even in the east region. As the growth in the future is increasingly determined by operational efficiency rather than blind expansion, more M&A will help to consolidate the retail landscape and make big players even stronger at a regional level before more national players emerge.

Consumers in China’s less-developed areas are driving the next wave of consumption growth in the country. Over the past three years the gap in ecommerce penetration between upper and lower tier cities has narrowed, with 75.7% of shoppers in lower tier cities using ecommerce to buy FMCG products. Alibaba has invested 10 billion yuan in its daily deals site Juhuasuan, demonstrating its commitment to stimulate further growth from lower-tier cities. This tier of cities contributed 70% of Alibaba’s new active customers in 2019. Competing with this is JD’s newly launched Jingxi platform, and Pinduoduo, China’s original group-buying platform, which has a strong focus on lower-tier cities. As China's top tiers market have become saturated, more growth is expected to come from from lower tier cities in 2020.