8 reasons for brands to target the over-55 category in France. 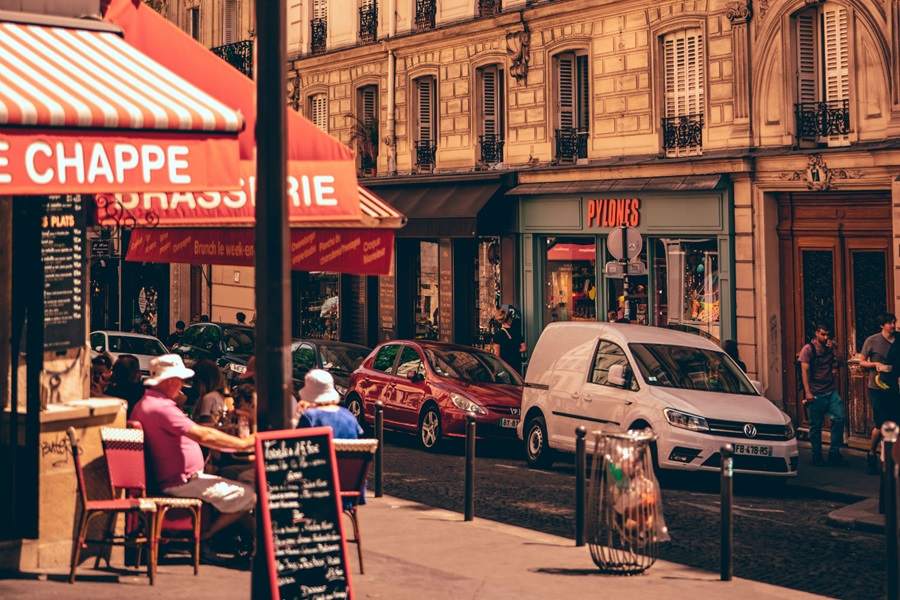 In a society with so much focus on Millennials, we have almost forgotten another, even more promising generation: seniors. Brands and distributors have not yet developed customer relations adapted to the over-55s and there are few specific offers that appeal to rather than stigmatise the elderly. The older generation though has real appeal. Here are eight reasons for targeting them.

Considering the changes in lifestyles and rising retirement ages, today’s seniors are nothing like those of yesterday. They were born into a consumer society with television, lived through the women’s liberation movements in the 1970s, are highly active, love travelling and are not afraid of starting a new life. ‘Being old’ is now a question of state of mind rather than age. And at what age does one become officially senior? The idea of ‘what age do you feel?’ is crucial. On average, a person aged 55 feels 45. Some believe that 80 is the age from which one might be considered old. Our studies have shown a radical change in food purchasing behaviour from the age of 55. 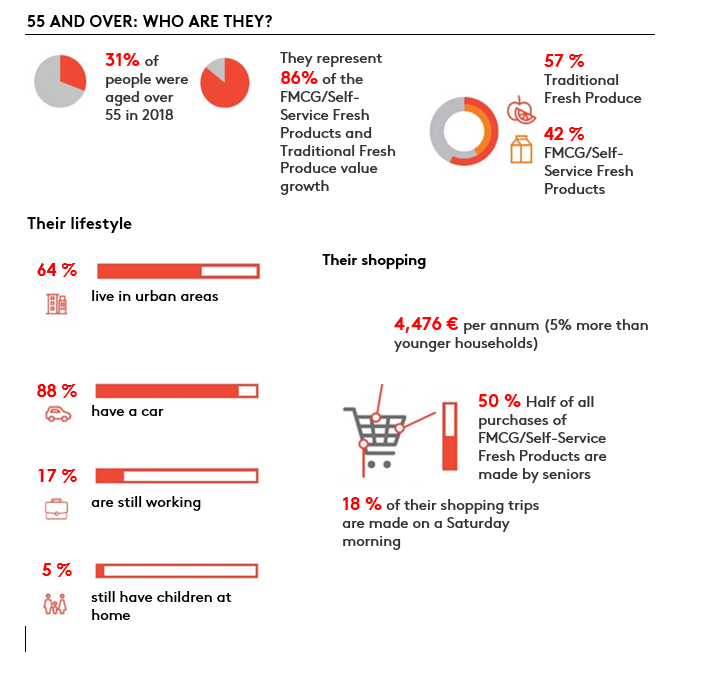 2. An important source of growth

In France, a senior is born every 37 seconds! People aged 55 and over will represent over 39% of French people in 2070, according to INSEE projections. The ageing population is causing the emergence of more and more products and services aimed at older people: the ‘silver economy’. So, this target should not be ignored when it comes to generating growth. For example, in the FMCG/self-service fresh products and traditional fresh produce market, 86% of value growth in 2018 was generated by seniors

When they go shopping, seniors are very sensitive to the products that they buy, with two major concerns: eating better and health. Seniors are the most involved consumers in the food market. They are more attached to local produce and Fairtrade than the average consumer. They are more familiar with ‘origin’ labels and trust them more. They also have more marked health concerns: “I am on a diet for medical reasons”, “I check the sugar content of food products”, “Nutritional information helps me to choose”

4. Enjoying the good things in life, often in the kitchen

Seniors are not pushed for time. They go shopping more regularly and talk to people when they go to the shops. They cook more, spending longer over preparing their meals. Fruit and vegetables form a larger share of their diet and they are more likely to make use of kitchen aids. They enjoy life and are more likely to have a pre-meal drink than the average consumer. But this is also true for starters, cheese plates and desserts, to which seniors are much more partial. The proportion of seniors who enjoy outside-the-home consumption is still much lower than the average, but is increasing much more rapidly. 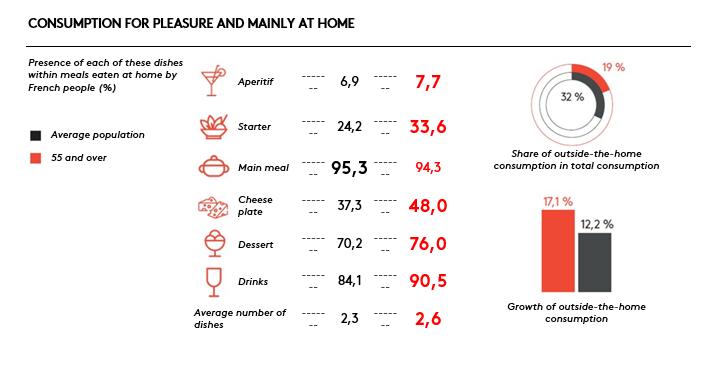 They go shopping more regularly (both routine and top-up shops) and their purchases are particularly fragmented: 8.1 stores frequented for a 60-something consumer's household compared with 6.8 for an under-35. Specialised circuits represent 24% of their purchasing acts with an unusually high frequentation of stores such as Picard, Grand Frais, Naturalia or Marionnaud. This can be a boon for distributors seeking to boost the traffic in their stores, provided they can offer service and advice. There are still few initiatives in this sense, but they are coming, such as the first supermarket dedicated to seniors, launched by Intermarché in late 2018: “Bien chez moi”

6. Connected, including when it comes to shopping

Contrary to conventional wisdom, 93% of seniors have a mobile phone, 51% a smartphone and 37% a tablet. They are well connected at home too, 85% have a computer, and 88% of them have internet access. As regards social networks, 46% have a Facebook account, with an average of 78 friends. This is also reflected in the ways they shop: 1 in 10 seniors have already bought FMCG+self-service fresh products online. However, their media habits remain fairly traditional: they rely particularly on the press (index of 133 compared with the overall population), radio (124) and television (123).

A person aged 60 and another aged 80 have not developed in the same economic, social and political context, and these parameters have influenced the way they consume. There are thus four groups of seniors, with very different behaviours. The ‘HMSM (Hypermarket/Supermarket) Generations’, are baby-boomers characterised by mass consumption and the emergence of the hypermarket. They differ from the ‘Traditionals’, who are the oldest group and come closest to our clichés (attached to small, local businesses, seeking social contact through shopping, etc.). The ‘Healthy Eaters’ are focused on more responsible consumption. And finally, the ‘Uninvested’ are characterised by a lack of interest in consumption.

A societal change is in progress in favour of a more positive image of ageing. The media are starting to make a fuss of seniors. Talking about this target no longer seems taboo, with codes that no longer stigmatise the elderly. The new Coke Zero advert is thus establishing older people as a new icon. The ‘going grey’ movement, which encourages people not to dye their grey or white hair, is gaining momentum. White hair is now becoming a source of pride and redefining fashion, like the journalist Sophie Fontanel, who is happy to proclaim her ‘blande’ (mix of blonde and white) status. Younger generations are adopting a ‘silver attitude’. A new category of Millennials has appeared: Sellennials, who are rethinking their methods of consumption by bringing back the habits of their forebears. They are adopting the slow cosmetics trend, want to eat responsibly, make compost, grow their own herbs and customise and recycle their old clothes.