Two shopping styles have emerged: regional supermarkets for physical proximity, and convenience and ecommerce for practicality and safety. 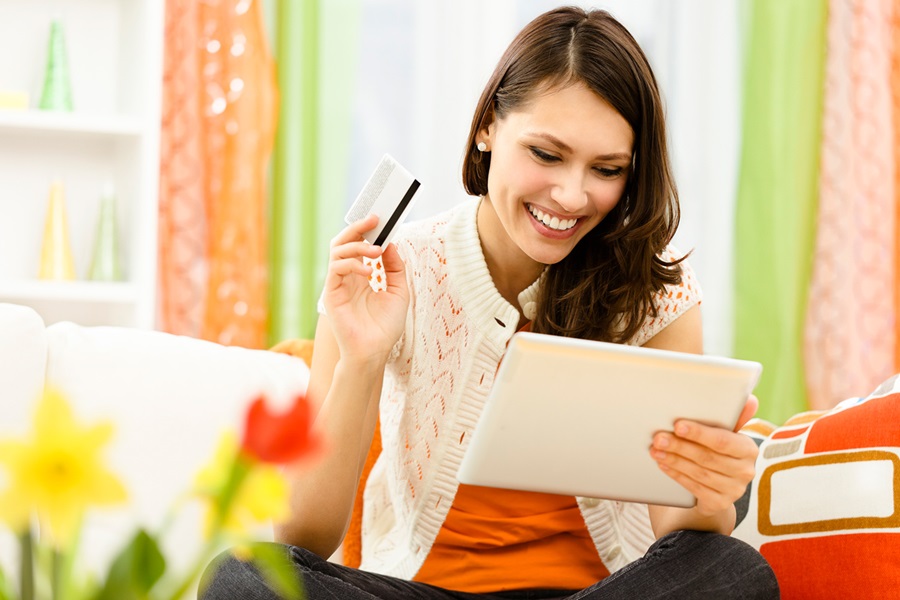 The FMCG sector in Spain has grown by 13.7% in value in the first 40 weeks of the year. The change in shopping habits has been marked by consumers who visit the shops less often, as purchasing frequency has fallen by 3.2%, but they load their baskets up to 14.6% more. Purchasing frequency, which hit rock bottom in the first lockdown, has been consistent since June and has not shown a clear recovery during the summer or back-to-school periods.

Consumers have spread their visits across different retail formats in the first nine months of 2020. Two shopping styles have emerged: regional supermarkets for physical proximity, and convenience and ecommerce for practicality and safety.

FMCG ecommerce has broken through during 2020. Consistent growth has helped ecommerce to reach a record annual market share of 3.6%, representing an increase in spending of nearly 60% compared to 2019. There are three key milestones this year. Firstly, ecommerce has become a habit in the Spanish market: purchase frequency has increased by 27%. Secondly, it has broken the barrier of reaching the over 50s, who have increased their share in the channel at the same pace as young people. Finally, it has maintained market share during the summer and back-to-school periods, 1.2 percentage points higher than those same periods last year.

Regional supermarkets have consolidated themselves as a purchase option

The three biggest supermarket groups continue to concede their market share in 2020, which is common in most western countries. The total market has grown but is now more widely distributed. However, it should be noted that the increase in volume from Spanish households means the entire retail sector is in growth.

During the back-to-school weeks, Mercadona managed to regain the market share it had in the lockdown period, growing more than during the post-lockdown period and the return to normality. However, these numbers are still below what it achieved in 2019, and it has seen a 0.8 percentage point loss of market share in 2020, although it has maintained its leadership with 24.8% of the market.

As for Carrefour and DIA, they have taken separate paths during the different phases of this year. In recent months, Carrefour has achieved similar market share figures to those it had at the beginning of the year, but this has not offset the drop it experienced during the lockdown. In October it stood at 8.2%, 0.5 points less than in 2019. DIA is almost the opposite: it achieved its highest market share in recent years during the lockdown, taking advantage of its large network of stores. Despite this, it has been losing market share in the months that followed, although it still maintains third place in the Spanish retail sector at 5.9% market share. 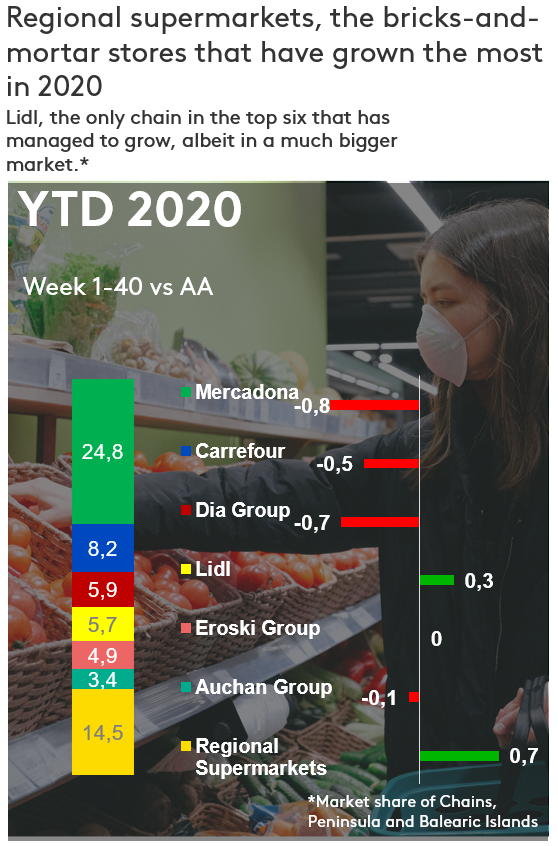 Lidl is the only large retailer that has managed to grow in the year to date, thanks to its reaction to, and growth after, the lockdown. It has regained customers and capitalised on larger shopping baskets, allowing it to gain 0.3 percentage points to achieve 5.7% market share.

Among the large groups, Eroski and Auchan have also had a good year, maintaining their positions in this larger market. Auchan has managed to elude the decline of the hypermarket at many points during a year affected by mobility limitations, with a market share of 3.4%. Eroski has gained strength in its strategic areas thanks to its positioning as regional supermarket (which have done very well this year), and the contribution from its online channel, giving it in a 4.9% share value.

The regional supermarket is the key to understanding the Spanish retail sector, and 2020 has made them even more important. Across every region and city in Spain there are local leaders in terms of sales and consumer sentiment. This means Spain is one of the most fragmented markets in the west, with Spanish consumers having a unique amount of choice. Regional supermarkets broke records during the lockdown, arriving at a joint share (not counting Eroski) of 16.3% of the Spanish market. The great success of these retailers has been retaining the consumers they have captured, not only for fresh products, but increasingly for a complete shopping basket. In October, regional supermarkets had a 14.5% share, gaining 0.7 points compared to 2019.

Spanish consumers have shown once again that they like to move between different options. This is why we see two retail themes, one that is global and digital such as ecommerce, and another that is local and traditional, such as regional supermarkets. At last we can truly speak of an omnichannel consumer who spreads their purchases among large national and regional distributors, bricks-and-mortar shops, and virtual stores.