Supermarket sales in the UK fell by 3.8% over the latest 12-week period, but grocery spending is still 8% higher than before the pandemic. How will it fare as prices go up? 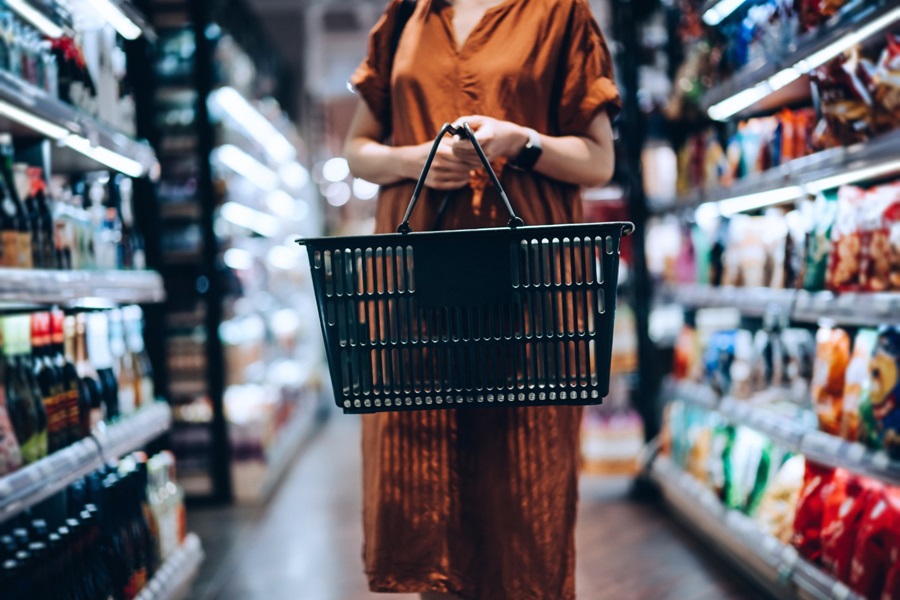 Our latest take-home grocery figures show that supermarket sales in the UK fell by 3.8% over the 12 weeks to 23 January 2022. These year-on-year figures reflect tough comparisons against the high demand of the lockdowns at the start of 2021, with spending remaining 8.0% higher than pre-pandemic times.

Households in Britain are facing a cost-of-living squeeze and the latest four-week grocery price inflation stands at 3.8%, a 0.3 percentage point rise from December. Prices are rising on many fronts, and the weekly shop is no exception. Like-for-like grocery price inflation, which assumes that shoppers buy exactly the same products this year as they did last year, increased again this month. Taken over the course of a 12-month period, this 3.8% rise in prices could add an extra £180 to the average household’s annual grocery bill.

We’re now likely to see shoppers striving to keep costs down by searching for cheaper products and promotions. Supermarkets that can offer the best value stand to win the biggest slice of spend.

A return to previous habits

These market growth figures do not include on-the-go food and drink purchases, which are likely to be higher than last year. Increasing confidence about heading out and about, combined with the return to the office, means we’re starting to see pre-pandemic shopping patterns once again. Since the first lockdown in March 2020, shoppers have been buying in bulk and visiting the supermarket less often. But basket sizes are now 10% smaller than this time last year, hitting their lowest level since the beginning of the pandemic, while footfall increased by 5% as every major retailer was busier in their stores.

Changing habits were most marked in London, where take-home sales of food and drink decreased by 11%. This suggests that people in the capital were the quickest to embrace eating out in cafés, pubs and restaurants, as many of us returned to city centres.

There was also evidence of people scrubbing up as the work from home directive ended and socialising increased. In fact, razor blade sales rose by 14% and spend on deodorant increased by 20% as Brits strived to make themselves presentable for the start of 2022.

Increased confidence in visiting stores was also reflected in online grocery sales. Digital orders accounted for 12.5% of all grocery spend, almost double the pre-pandemic proportion. Though online purchases are down year on year by 15%, it’s important to remember that this is in comparison with the strict lockdown we faced in January 2021 when the public was staying indoors when possible.

This year’s Veganuary and Dry January led to strong results for no-alcohol and low-alcohol beverages, as well as plant-based products. After an indulgent Christmas, the new year brought the usual commitment to making different choices. Dry January converts pushed up sales of alcohol-free beer by 5% and the numbers for retailer's own-label ranges marketed as healthy were even stronger, increasing by 8%.

Though fresh fruit, salad and vegetable sales were down compared with last year, plant-based products proved more popular than ever. A record 10.7 million households bought at least one item that was a dairy alternative, a meat substitute or labelled as plant-based this January. Sales growth for these veggie favourites was 0.5%, well above the wider grocery market. 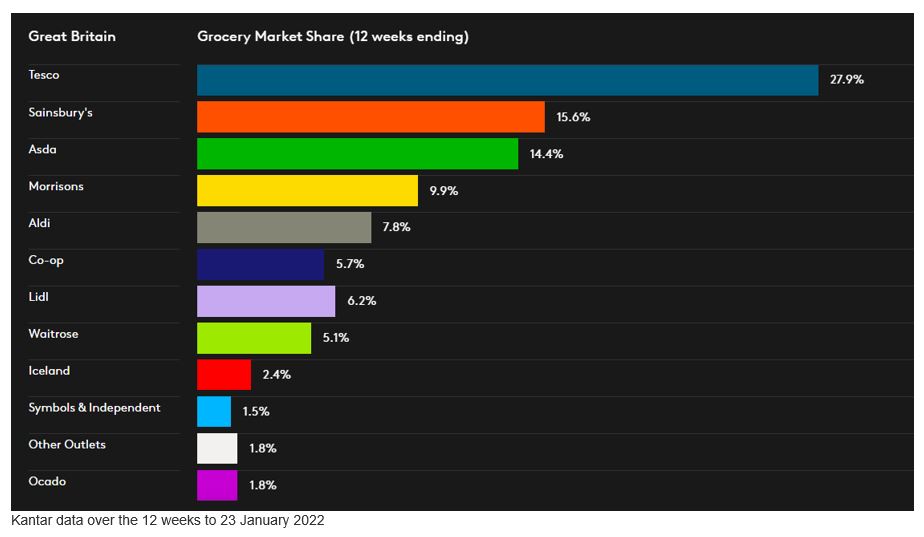 Only three retailers recorded year-on-year growth this period, but every single grocer boosted its sales over the last two years. Ocado sales grew by 2.3% over the past 12 weeks, with its share of the national grocery market increasing by 0.1 percentage points to 1.8%. That number almost doubles in London specifically, where the grocer accounts for 3.4% of all sales.

Lidl and Aldi recorded simultaneous growth for the first time since June last year. Lidl was the fastest growing physical retailer and increased its sales by 1.2%, boosting its market share by 0.3 percentage points to 6.2%. Aldi gained an additional 1.1 million extra shoppers over the past 12 weeks, helping its share grow by 0.4 percentage points to 7.8%. The grocer’s sales also rose by 1.1%.

Both Tesco and Waitrose performed ahead of the market over the past 12 weeks and increased share. Tesco’s share moved up from 27.3% last year to 27.9%, marking a full year of market share gains for the retailer. Waitrose saw the greatest footfall increase of any supermarket, helping its market share increase by 0.1 percentage points to 5.1%.