The 2017 Shanghai Auto Show can refresh your understanding of Chinese automobile companies.

China sold 28 million vehicles in 2016, 13.7% higher over the previous year. The fastest growth rate in three years consolidated its status as the world’s largest auto market. Its annual auto show, which is held in Shanghai and Beijing in turns, has become one of the most important events for the world’s auto industry. This year’s show is held in Shanghai from April 19 till 28. I have focused my attention on the performances of Chinese auto brands during this mega event.

New powers coming onto the stage

In China, there is a unique term called “PPT automakers”, which refers to those companies which had announced that they are going to produce cars in the new future, even though all they had was just a beautifully designed PowerPoint presentation deck. People’s attitude towards these “new comers” grew even more sceptical after the high-profile new automaker LeEco was involved in a serious cash flow crisis.

But from 2017 Shanghai Auto Show, we can see new powers are really emerging.

LYNK & CO is a joint effort by Geely and Volvo, which Geely bought from Ford in 2010 with US$1.8 billion cash. LYNK & CO announced it is a combination of safety, sharing and connectivity. Geely and Volvo developed a new structure for LYNK & CO cars. The first car, LYNK & CO 01, will be ready for market in this autumn.

The most unique attribute of this brand is its promise to revolutionize people’s relation to cars: Consumers can buy, borrow, subscribe or share it. Besides buying a car, consumers can “subscribe” to a car so their current car will always be replaced by the latest model. Each model comes with one fixed price with everything just the same, except colours. LYNK & CO’s app connects the owners to their cars and every other LYNK & CO car. The car is always online via Wi-Fi hotspot, so users can connect to it from anywhere.

When they are not using it, car owners can share their cars with other LYNK & CO users through digital lock codes with a time limit. LYNK & CO car will recognize each driver’s customized setting and adjust every car accordingly. The company will also open the API so app developers can try to develop apps to create new car experiences.

To align with the brand’s propositioning, LYNK & CO booth is full of elements of sharing and fun, such as swings, seesaws, DJ and photo booths for GIF mug shots to be shared through WeChat. It is the most youthful, energetic, playful and exciting stand I visited during the whole auto show. 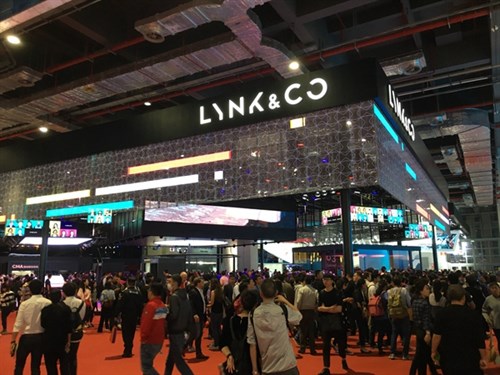 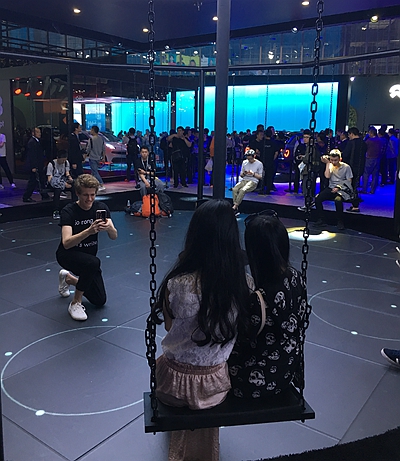 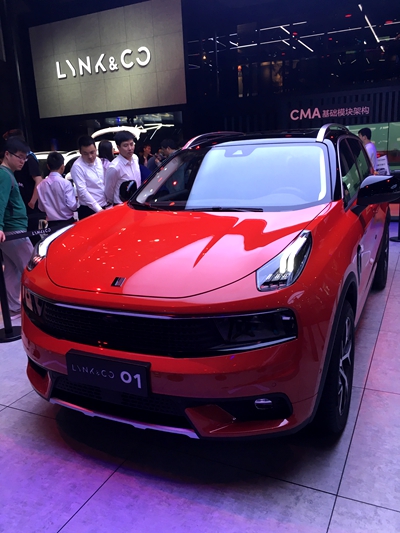 2. NIO is a new Chinese auto start-up focusing on electric and autonomous vehicle. The company just completed its third round fundraising since its establishment in 2014. Major institutional investors include Tencent and Baidu. During the Shanghai Auto Show, the company unveiled its 7-seat SUV ES8.

Because the car is based on a brand new concept, its chassis has a new design which will allow mechanics, or even robotic arms, to easily change batteries from underneath the car. This gives NIO the option to offer a new energy charging solution: Switch empty batteries with fully charged ones at “battery stations” so drivers don’t have to wait for hours at charging stations.

NIO also displayed its flagship super racing car EP9, which set the new lap record for an autonomous car (Circuit of the Americas, 2’40”33, February 23, 2017) and the new lap record for an electric vehicle (Nürburgring Nordschleife, 7’05”120, October 14, 2017). According to a Caixin report, the first batch of six cars have been bought by the company’s founding investors, including Pony Ma (founder, chairman and CEO of Tencent), Liu Qiangdong (founder and CEO of JD.com) and Lei Jun (founder and CEO of Kingsoft and Xiaomi). The second batch will include 10 models and priced at US$1.48 million. 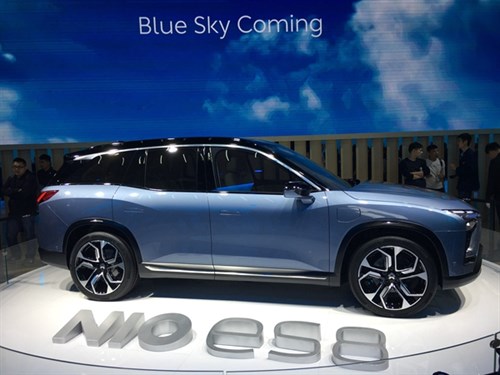 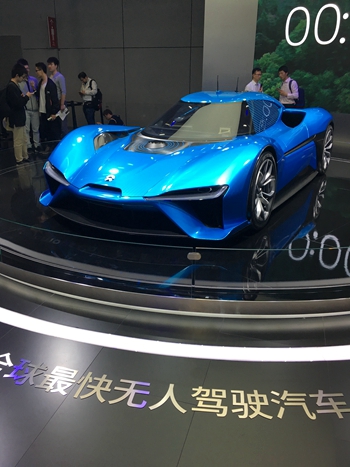 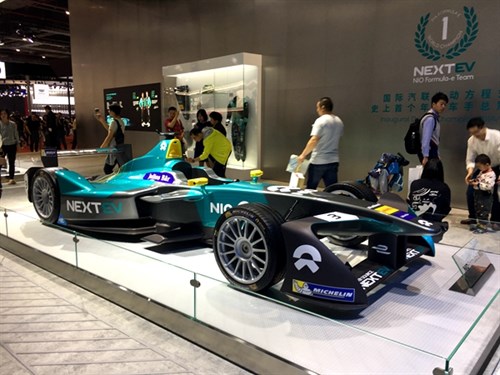 NIO also showed that its Formula-e Team has won the inaugural driver’s champion of Formula-e races, which is one of FIA’s top motor racing events. It has also organized formula-e races among Chinese university students for two years. Apparently NIO is in this business for the long run.

3. WEY is the first Chinese auto brand named after its founder. The inspiration of its logo comes from the flag pole in front of the former residence of Viceroy of Zhili at Baoding City, Hebei Province. Baoding is the home town of Wei Jianjun, founder and chairman of Great Wall Motors, which owns the WEY brand. The English word WEY and the city name POATING in the logo are different from their standard Chinese Pinyin, which are “Wei” and “Baoding”. It is reported that the company deliberately changed the spellings to make it easier for foreigners to pronounce them. 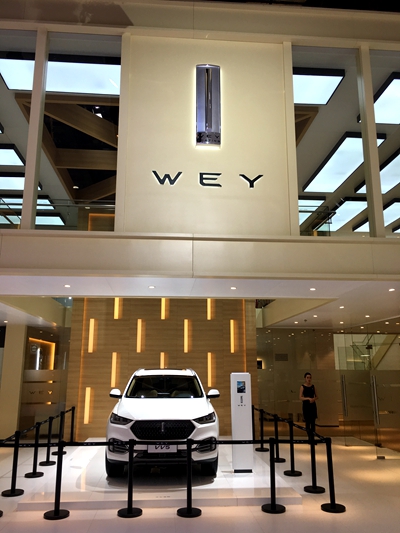 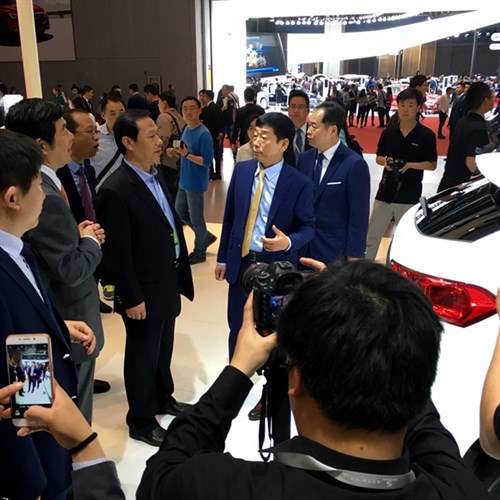 Great Wall Motors is the dominant player of SUV in China – its HAVAL brand is the best-selling SUV brand for several years. But the brand’s attempt to break into more premium market failed. According to a Xinhua News Agency report, HAVAL launched its H8 model to target 200,000 yuan SUV segment. But H8, and its sister premium model H9, never won warm responses. The accumulative sales of H8 in the first 10 months of 2016 was 5,967 and that for H9 was 9,032, both lower than a year ago.

It seems that right after H8 was launched, Great Wall realized that HAVAL brand would never break into the higher priced sector – maybe the price range of HAVAL-branded SUVs would be only 130,000 yuan – 150,000 yuan. In retrospect, it is very likely that the work of a new premium SUV brand began in 2013 or 2014, because the launch of a new car brand usually takes three to four years. In this sense, we could see that one of the key competitiveness of Chinese car companies is their fast decision making process.

(Some) Chinese brands take game to the next level

In many people’s mind, Chinese auto brands are more or less equivalent to “copycat” and “bad quality”. But during this Shanghai Auto Show, I noticed that copycat Chinese car model have increasingly become “endangered species”. (Even though there are still some of them!) More Chinese brands are becoming sophisticated, and very quickly. Foreign brands’ advantages over them have diminished. Some foreign brands have even fallen in the “striking range” of Chinese brands.

HAVAL, the most successful Chinese SUV brand, has grown into a very confident brand. Its new model – H7L – carries HAVAL logos on its wheel hubs, lighting units and front grille. HAVAL is very confident that owners will be proud of driving a HAVAL SUV, while in not very long ago, the first thing people did after buying a Chinese branded car was to “wipe out” the Chinese characters on the vehicle. Maybe now with more than 1 million HAVAL SUV sold in 2016, the brand deserves some confidence in itself.

The newly launched blue label H6 Coupe has a central console equipped with a 9-inch LED screen, a parking imaging system, leather seats and a panoramic sunroof. These features could be found only on premium models of foreign or joint-venture car brands. But these are standard equipment on H6 Coupe, whose price range is 129,800 yuan – 149,800 yuan.

BYD is another more sophisticated brand in China, which has become a very important player in new energy vehicle sector: it sold 100,183 units in 2016 to become the world’s largest manufacturer of new energy vehicles.

BYD’s maturity could be found in several aspects:

2. It has a clear new energy roadmap: BYD has begun mass production of dual-mode and pure electric cars in addition to traditional gasoline cars. For example, its new Song, Qin and Yuan series all have DM (dual-mode), EV (pure electric) and gasoline versions;

3. It begins to develop its proprietary design language. During this Shanghai Auto Show, the industry insiders were paying a lot of attention to the launch of its “Dynasty” prototype vehicle, which is designed by its new design director Wolfgang Egger. In 2016, BYD recruited Wolfgang, who were former chief designer for Alfa Romeo, Audi and Lamborghini, to lead its design work. The “Dynasty” prototype reflects Wolfgang’s “Dragon Face” concept for BYD. For example, at the front, the prototype has a “dragon mouth” grille, a logo in ancient Chinese Zhuan font, “dragon beard” chrome trims, and “dragon eye” lighting units. 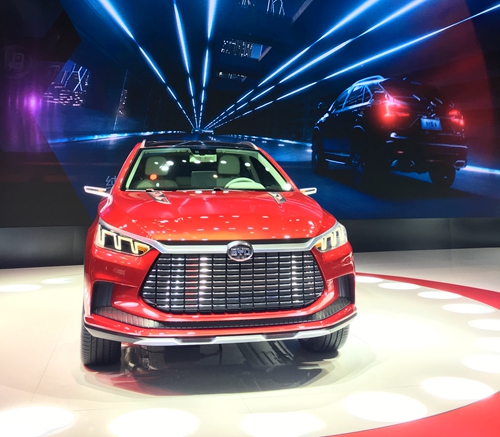 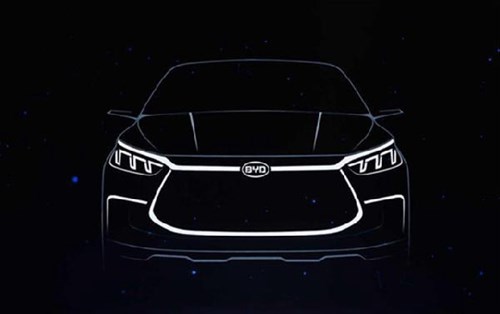 The design has been applied to the new Song 7-seater MPV unveiled at this show. New BYD cars will all follow this design language. 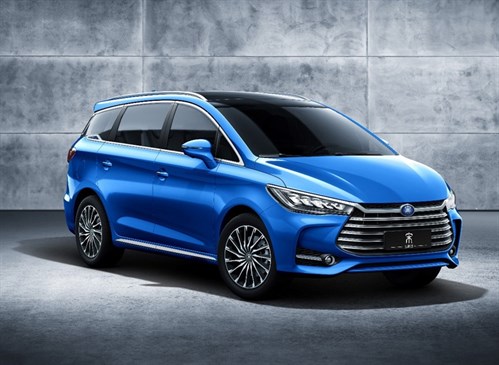 Besides organic growth, Chinese automakers are also trying to break into new segments through buying foreign brands and technologies, such as SAIC buying MG Rover’s technology and NAIC buying its MG brand name.

Beiqi Foton Motor, China’s largest commercial vehicle maker, unveiled the once defunct German premium car brand BORGWARD at the show, attempting to elbow into the passenger vehicle market. According to its public statement, future BORGWARD cars will be designed in Germany, produced in China and sold initially in China and other markets later. 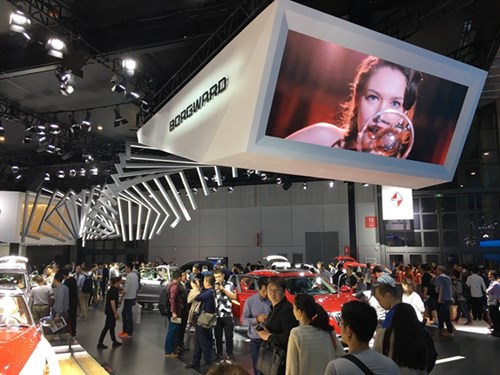 Looking back into the growth path of Chinese auto brands, if we can make an analogy, I would say Chinese brands used to be like street food vendors: They could meet basic needs, but their quality was unstable and unreliable. There were no creativity in their cars, neither would consumers be proud of driving a Chinese brand car.

But now, some Chinese brands have raised their game to the equivalent of Kungfu or Old Uncle in fast food market in China, which have already become serious challengers of McDonald’s and KFC: They have consistent control over product quality and consumer experience. There are some creativity in product innovation and marketing campaigns. They are experts of understanding local consumers. They offer unbeatable value for money.

South Korean brands are the first to feel the threat of Chinese brands. The tense political backdrop between the two countries did contribute to the difficulties that South Korean auto brands are undergoing, but we have to admit that their products are really not competitive enough if compared against Chinese cars.

Having said that, Chinese brands are still a long way behind European and US brands. For example, the sales of Volkswagen were almost intact in China after its diesel emissions scandal was uncovered in the United States. Those sophisticated and emerging foreign brands are apparently at a much higher level – technology, brand and culture have offered them protections.

However, if Chinese auto brands can continue their strong momentum in learning and growing, the next group that would fall victim to their rise would Japanese brands, and then French brands. Sooner or later, top foreign brands, if they don’t invest enough to understand Chinese consumers and innovate for the local market, would feel the threat from Chinese brands. By then, they will lose more than just the Chinese market.