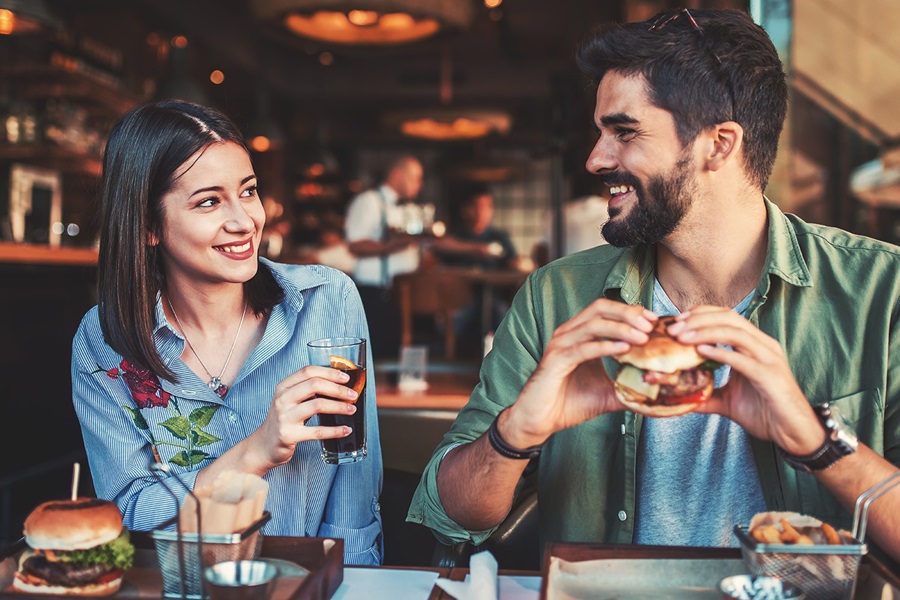 The latest grocery market share figures from Kantar show take-home grocery sales rose by 10.8% during the 12 weeks to 6 September 2020. While it marks the sector’s fifth consecutive period of double-digit growth, sales slowed in August as some aspects of pre-COVID life resumed.

In the most recent four weeks year-on-year sales growth decelerated to 8.0%, the slowest rate since April 2020. Grocery growth tailed off in August as the Government’s Eat Out to Help Out scheme got underway and people were encouraged to return to offices and resume normal routines. Diners’ confidence built throughout the month and footfall increased* during each week of the scheme, culminating in the final bank holiday Monday when dining out accounted for two and a half times greater share of consumer spend than the pre-COVID average.

Fewer meals eaten at home meant consumers spent £155 million less in the supermarkets in the four weeks to 6 September compared with July. Alcohol sales dipped month on month, with wine down 5% and beer down 10%, as the scheme encouraged people to swap Zoom catch ups for their favourite bars and restaurants. The chance to see colleagues, friends and family in person again seems to have reignited personal grooming routines – sales of hair styling products were 17% higher in August than July, hair removal treatments were up by 11% and deodorants by 3%.

Online grocery sales rose by 77% year on year in the past four weeks, bringing the cumulative increase in orders to £3.2 billion since lockdown began. While online grocery growth is still impressive, it has slowed for the second month in a row and dropped back to 12.5% of total sales this month from a peak of 13.5%. This is not just about people going out to eat in restaurants, August also brought shielding to an end for many vulnerable and at-risk people.

Ocado, which launched its partnership with Marks & Spencer’s to shoppers on 1 September, was the fastest growing retailer over the past 12 weeks, with sales up by 41.2% year on year. Its former partner, Waitrose, increased overall sales by 7.3% compared with last year, and Waitrose.com experienced the fastest year-on-year online growth of any retailer.

Amid a challenging economic climate, retailers across the board are finding new ways to deliver value for customers. As we move out of summer and closer to the end of the Government’s furlough scheme, retailers are thinking about how they can help households manage their bills. Promotional activity is now back to the highest level since February 2020 and is focused mainly on straightforward price cuts, with shoppers spending £247 million more on these deals compared with a year ago. Meanwhile, multibuy deals are down £116 million over the same period.

We expect loyalty schemes to become increasingly important in the months ahead. 26 million British shoppers hold at least one supermarket loyalty card, with the average person carrying three in their wallet. Lidl launched its ‘Lidl Plus’ loyalty app in the UK last month and Tesco, which runs the single biggest scheme with ‘Clubcard’, continues to launch new discounts through the programme. Lidl increased its sales by 11.4% and Tesco by 10.5% over the 12 weeks and both retailers held market share year on year.

Iceland continues to benefit from the performance of frozen food this year and grew sales by 20.8% during the 12 weeks, achieving a 2.4% market share, up from 2.2% last year. Aldi increased sales by 10.0%, with its market share slightly down on last year to 8.0%. Aldi will be hoping its upcoming sponsorship of ‘The Great British Bake Off’ will help it build on the 8.7 million shoppers who already buy sweet or savoury home cooking items in its stores.

Sales at Co-op rose by 13.4%, but increased by more than double this rate in the North of England, where local lockdowns mean consumers are continuing to shop closer to home. Meanwhile, symbols and independent retailers saw sales rise by 31%. While shopper numbers are down by 2.3 million from the May-lockdown peak, those customers still visiting spent £131 on average over the 12 weeks, £24 more than the same time last year.

*Based on Worldpanel Plus daily data – an index of shopping trips across every physical channel and major retail brand in both food and non-food channels. Every week 700,000 receipts are collected on a daily basis from more than 80,000 panellists. Comparisons with pre-COVID habits are made to the six weeks ending 23 February 2020