The combination of inflation and festive spending means that the coming month is on course to be the biggest ever for take-home grocery sales. 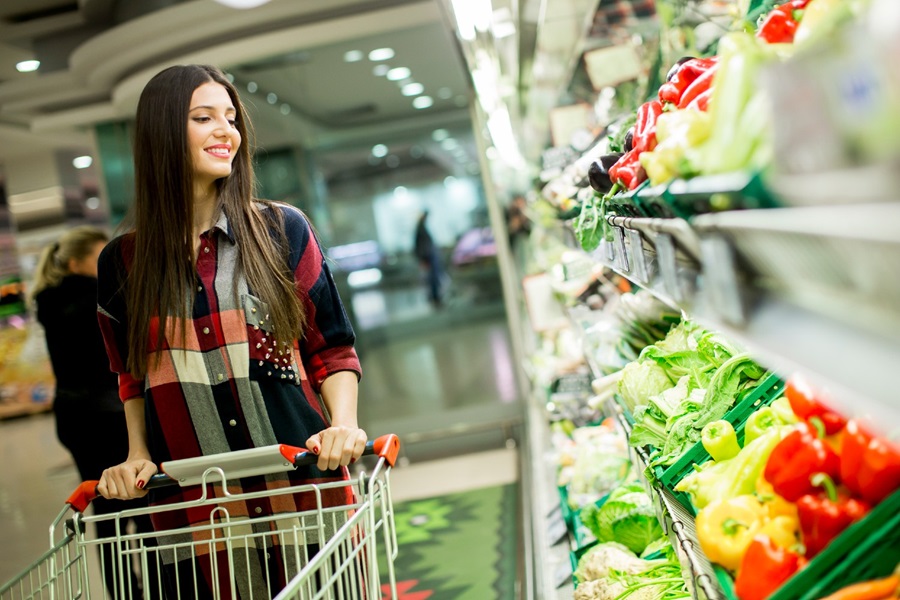 The rate of grocery price inflation has fallen for the first time in nearly two years, according to our latest figures, with four-week inflation now standing at 14.6%. Take-home grocery sales have increased by 5.9% year on year in the 12 weeks to 27 November 2022, the fastest level of growth since March 2021.

As we move into the busiest time of the year for supermarkets, there are signs that the pace of grocery price inflation is easing off slightly as we saw a small dip of 0.1 percentage points this month – the first drop in 21 months. Grocery inflation still has a long way to come down though and based on the current rate, shoppers will have to spend an extra £60 in December to buy the same items as last year. The cost of a traditional Christmas dinner for four has hit £31 in 2022, an example of just how much rising prices are impacting people at the tills and in their daily lives.

The combination of inflation and festive spending means that the coming month is on course to be the biggest ever for take-home grocery sales. December looks set to be a record-breaking month with sales going above the £12 billion mark for the first time. We’re expecting Friday 23 December to be the busiest day for pre-Christmas shopping.

Consumers are leaving their seasonal purchases later this year as they try to manage budgets in the run up to Christmas Day. Sales of mince pies, Christmas puddings and Christmas confectionery are worth 2% more than last year, but this rise can largely be put down to higher prices. If we look at the amount of people buying these items and the overall number of purchases made, then sales are actually down on 2021.

We’re seeing yet more evidence of the coping strategies shoppers are adopting to mitigate rising costs, and in particular own label sales are growing at pace, now up 11.7% year on year. The cheapest value own label lines have soared by 46.3%, but people still want to find room for treats at this time of year and this is driving growth at the other end of the spectrum too. Premium own label sales are up by 6.1% to £461 million in November.

Shopping frequency highest since the pandemic

The number of times people visited the supermarkets hit a new high this period. Households went grocery shopping more than 48 times in the 12 weeks to 27 November, that’s the highest frequency we’ve recorded since April 2020. This is largely about the gradual return to pre-COVID behaviours – something we’ve been following for many months.

As the men’s FIFA World Cup tournament continues, the excitement around England’s performance and Wales’ first cup showing in 64 years hasn’t translated into rapid sales rises at the supermarkets.  We haven’t seen a big World Cup effect – at least not yet. Take-home beer sales nudged up slightly in the last four weeks, covering the first week of the tournament, by 5% to £230 million, but mostly due to increased prices. Many people are taking the chance to enjoy a social pint while watching the games in bars and pubs, whereas last year we were in the middle of a COVID resurgence so consumers were limiting their movements and going out less. We’re likely to be marking the impact of that comparison with higher at-home volumes one year ago. Crisp and snacks have fared better this winter, however, with sales up by 18%. 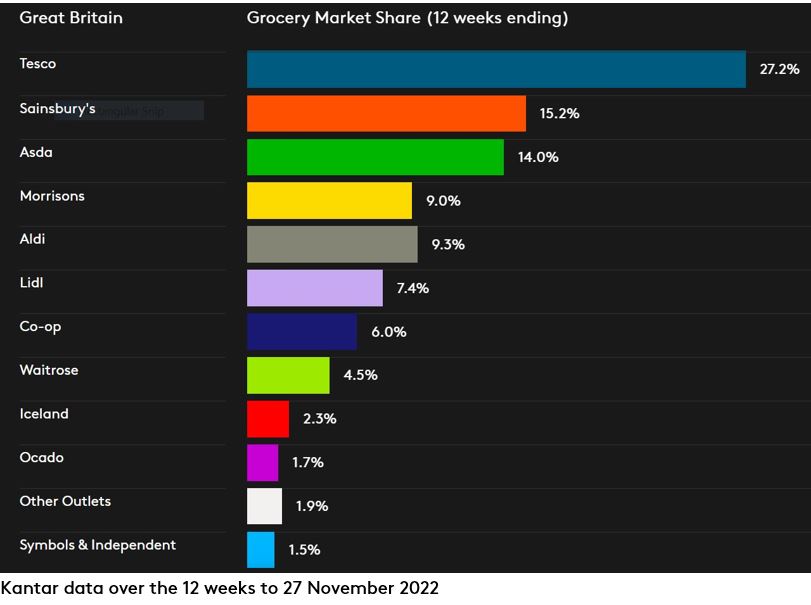 The strong growth of the discounters continued over the latest 12 weeks with both Aldi and Lidl opening new stores across Britain.  Lidl’s year-on-year sales increased by 22.0%, pushing its market share to a record 7.4%. An additional 1.5 million households shopped with Aldi compared with 2021 as it grew sales by 24.4% to claim 9.3% of the market.

Convenience retailer Co-op increased sales by 3.5% and achieved 6.0% market share. Waitrose’s market share is at 4.5% while Iceland’s sales grew by 6.1%, as its share remained at 2.3%.  Ocado’s market share is slightly down at 1.7%, with sales declines concentrated in its traditional south east and London heartland. However, the online specialist continues to expand its reach in northern England.