Vikings took over #1 most enjoyed title in the first quarter of the year, dethroning the South Korean drama, Squid Game. 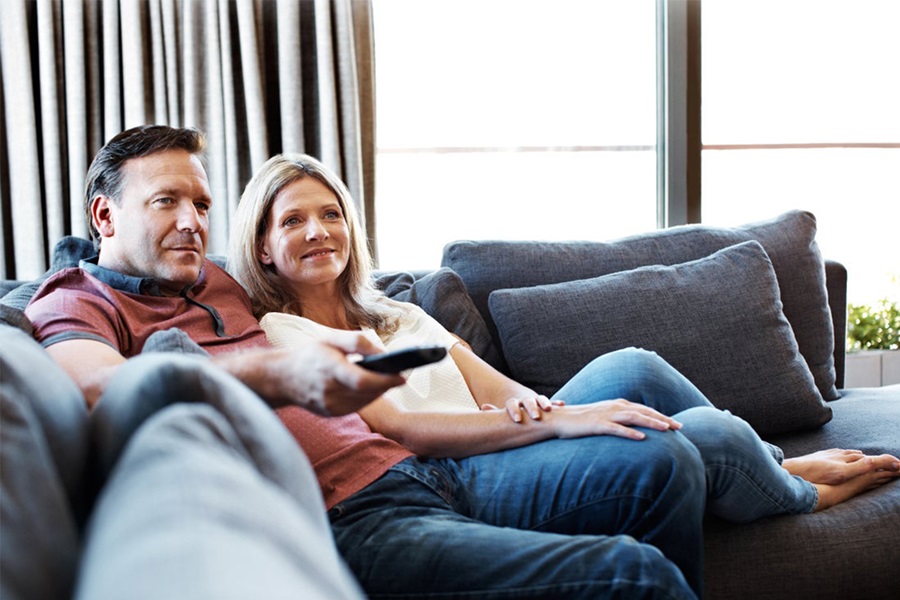 Get in touch
TechnologyCPGConsumer Shopper & Retail

Our Entertainment on Demand study in Germany shows that over the last 12 months, the German subscription video on demand (SVoD) market has managed to grow household penetration by just +0.9% points, hitting 51.3% in Q1’22. The average SVoD enabled household holds 2.8 subscriptions, the same number as a year ago. This compares to SVoD penetration in Great Britain at 58%, 64% in Australia and 86% in the US. Growth in Europe’s largest market by population, has stalled. Even services like Amazon Prime Video, that have dominated share of new subscriptions over the last year have seen subscriber numbers remain flat, as those leaving the service counteract those joining. Disney+ is the only major SVoD service in Germany to claim significant growth over the last 12 months.

Other findings from this quarter’s German Entertainment on Demand study for the 3 months to March 2022 include: 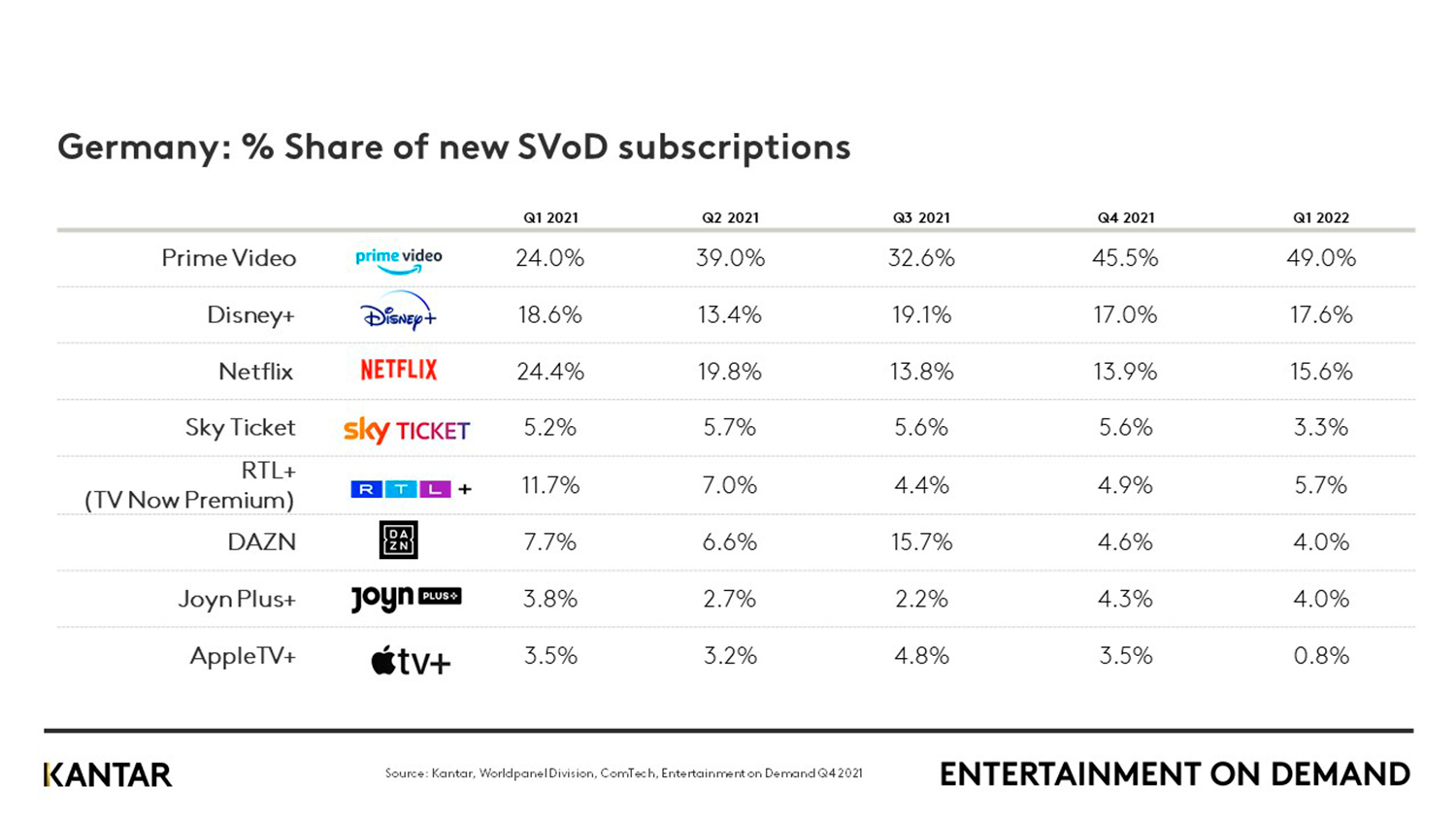 It is well known that attitudes towards SVoD differ significantly by market. In Germany, using SVoD to ‘switch off’ is a key factor behind viewing time with two-thirds (65%) of SVoD subscribers agreeing/strongly agreeing with the statement ‘I use video streaming to switch off’, an over index of +8.4%pts vs GB. The binge-watching culture is not as present in Germany with only 51% agreeing/strongly agreeing with the statement ‘I tend to binge watch a series’ and 42% for the statement ‘Watching films/series is my favourite pastime’, 60% and 47% in GB respectively. The challenge for SVoD services in Germany is to position themselves as the #1 service switched on when a subscriber is looking to switch off.

Switching rates in the German market remain significantly higher than those in Great Britain or the US, with 18% of German consumers cancelling a service to make way for a new one in the latest quarter, which compares to 13% in GB and just 11% in the US. As the number of SVoD services increases across Europe, the relative importance each subscription plays in a household is becoming crucial. In times of financial uncertainty, services need to be positioned as indispensable in subscribers’ minds. This represents significant challenges for the likes of Disney+, RTL+, Sky Ticket and AppleTV+ often being utilised as a service to fulfil specific viewership needs. The implications are in turn significant, as they must turn their attention to replacing existing services households subscribe to, not always being an incremental addition to a subscriber’s portfolio.

Is AVoD the answer?

In a market where the appetite to stack SVoD services is limited, can ad-supported services start to drive further subscription adoption? Taking the US as an example, ad-supported services drove rapid growth in the market, playing a key role in raising the level of average subscriptions per VoD-enabled household from 3.1 (Q1’20) to 4.8 in Q1’22. Since the beginning of 2021, the proportion of the German population saying they ‘don’t mind seeing ads on video streaming services if it makes them cheaper’, is up to 39% from 36% a year ago. The real challenge for these services is to provide a compelling content offering to entice new subscribers in and offset the pain point of adverts. Discovery+ has committed to a wider European rollout in mid-2022, bringing a wealth of new content to the German market, notably their non-fiction, factual, lifestyle and sports content, alongside strong discovery ‘originals’. In addition to discovery+, other prospective ad-supported services such as Paramount+, and Peacock have also committed to a German rollout in 2022. The growth potential of ad-supported services is yet to be realised, and with limited prevalence in the German market at present, these forementioned services will be looking to spark immediate growth through getting strong content to consumers at a low price point.

Another route to potential future growth within the German market is through tapping into demographics with low SVoD penetration. 40% of the German population are aged 55+, yet only 30% of this age bracket have an SVoD subscription within the household. In comparison, 79% of GenZ households and 76% of millennial households have an SVoD subscription. Content has been the driving factor behind subscription adoption previously and has formed the base of any new subscription that is considered. However, the older demographic are more discerning, looking beyond content when considering a streaming service. The challenge for SVoD services is to appeal to this older audience, with the top three reasons for 55+ year olds taking out a subscription in Q1’22 being ‘Specific content, Value for money (+10%pts vs GenZ) and Ease of use (+4%pts vs GenZ)’. Not only are subscription reasons different, but those aged 55+ also have a distinctively different path to subscribing, with 26% visiting a services website, 20% speaking to friends and family and 19% testing a service through friends and family on route to their chosen service. Whereas in younger demographics that have taken out a new SVoD subscription, we note significantly higher proportions being reached through social media ads, out-of-home adverts and free trials. Prime Video is the most popular destination in the 55+ age bracket also, capturing an impressive 60% share of new SVoD subscriptions. What is evident is that different tailored propositions are needed dependant on the target audience; we know the younger demographics respond well to content and paid for advertisements, whereas the older demographic need to be guided, and encouraged into the category via advocacy among key cohorts, driving website traffic and communicating the ease of SVoD.

It is increasingly clear that something needs to change for subscription stacking to become more prevalent in Germany. The big question is whether the introduction of ad-supported services can drive this upward curve in subscriptions, or if in fact SVoD services can start to tap into low penetration demographics through bespoke offerings.

Get in touch
Related solutions:
Entertainment On Demand Panel
Follow every step on the digital subscription customer journey to understand the music and video on demand spaces.
Learn more