38% of Netflix cancellations in Q3 due to cost, suggesting potential positive reception to ad-tier launch. 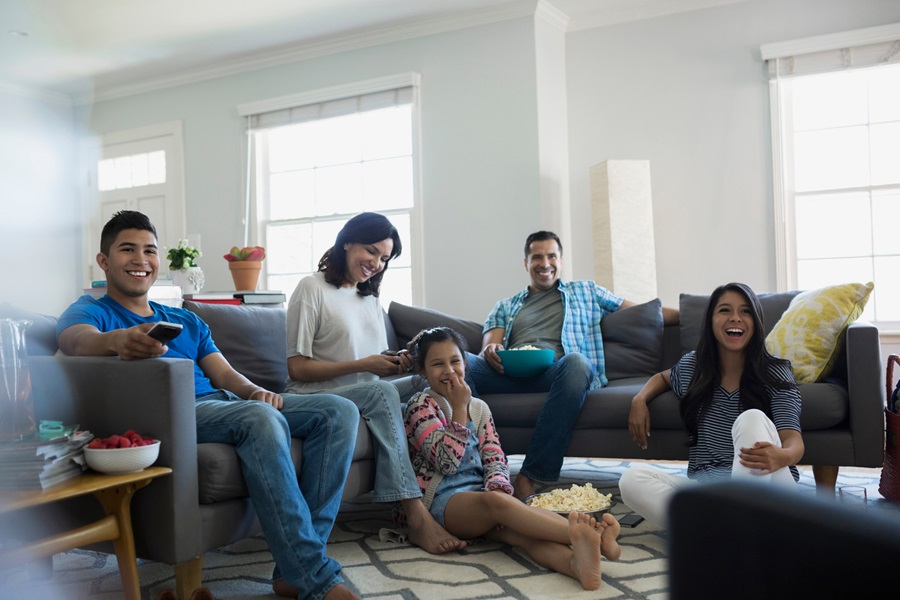 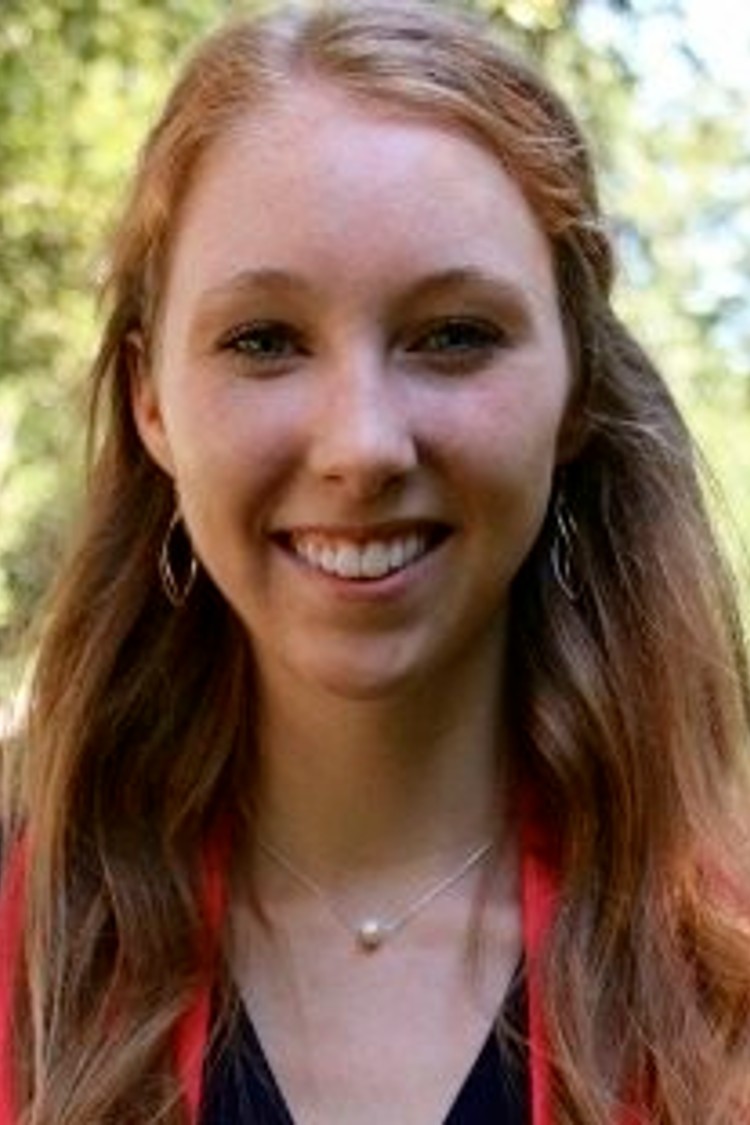 That’s according to Kantar’s Entertainment on Demand (EoD) streaming analytics service, which looks at streaming consumer behavior. Q3-2022 Highlights of the analysis include: 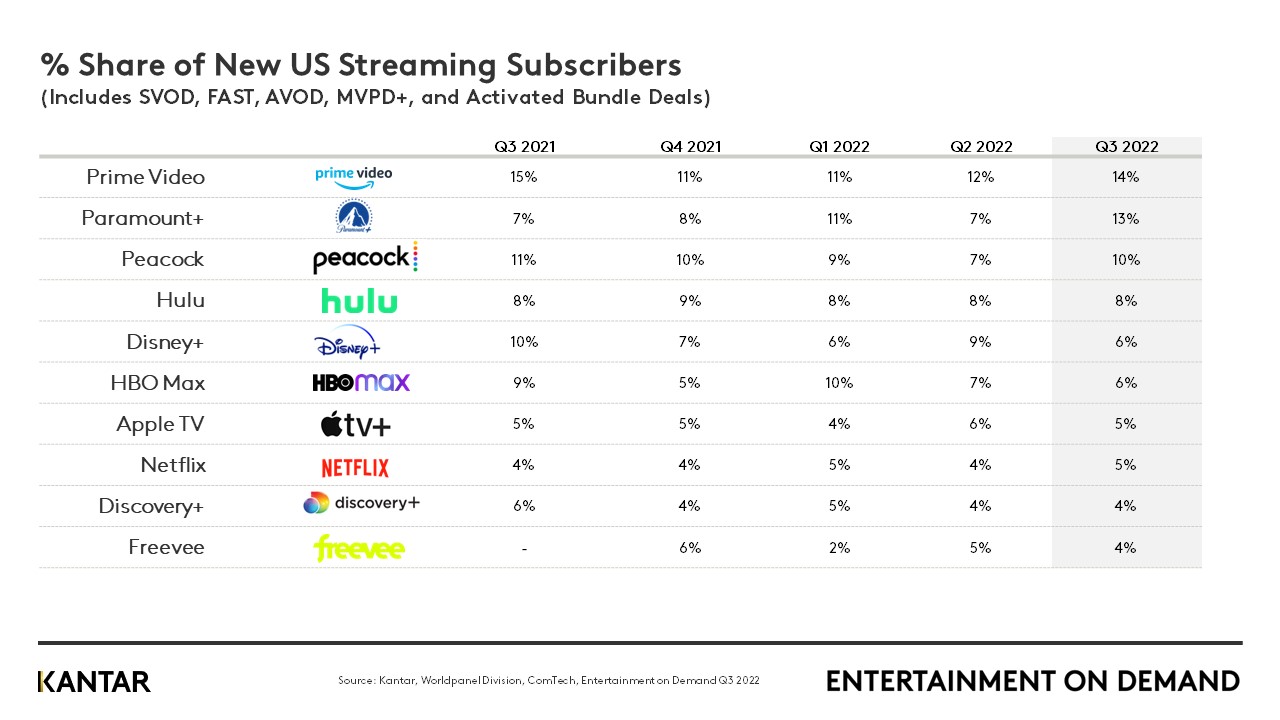 In Q3’22, the total streaming market was flat, with total US household penetration dropping by just 0.3%. This flatlining is driven by SVoD (paid, ad-free) streaming, while AVoD (paid, ad-supported) and FAST (free, ad-supported) offerings are still seeing growth. The decline of the SVOD category was driven entirely by Netflix, Amazon Prime Video, and Showtime. When excluding these three platforms, it is clear the state of the SVoD industry is still very healthy. Below the surface, most SVoD platforms saw growth in Q3’2022, driving the rest of the SVoD category up by 3%. Meanwhile household AVoD penetration also rose 3%, and FAST by 6%.

As most streaming platforms saw growth in Q3’2022, stacking continued to rise. Stacking has again reached a record number, with households on average accessing 5.2 streaming services (up from 5.0 in Q2’22).

In Q2’22, with the growth of AVoD far outpacing SVoD, it was clear consumers were willing to reduce the cost of their subscription repertoire by watching ads. But in Q3’22, both SVoD (excluding Netflix, Amazon Prime Video and Showtime) and AVoD grew at similar rates as stacking also grew. Now, consumers are discovering which platforms they value more at a higher cost than others. For example, for Hulu, its SVoD offering helped drive growth, but for Peacock, it was AVoD.

Cable TV cancellation also slowed in Q3’22. In Q2’22, Cable TV lost more than 1M households, but in Q3’22, that number reduced to just 0.3M. Consumer behavior towards ads and spending has shifted in Q3’2022. Viewers are no longer cutting costs and choosing ads at the rate they were in Q2. Instead, they are more likely to keep their Cable TV and subscribe to higher cost streaming than they were in the previous quarter. While this is a positive outlook for streaming as a whole, it may not continue as the economic outlook worsens over the next year. Platforms must continue proving their value to justify their cost.

Top Content that led to sign-ups in Q3’22: House of the Dragon, Stranger Things, Yellowstone, Sports/NFL, The Boys.

Top Content that was cited as most enjoyed in Q3’22: Stranger Things, Virgin River, Better Call Saul, Only Murders in the Building and House of the Dragon. Most of the top titles are higher budget and original, where typically the ROI pays off. To minimize the potential risk of churn for new subscribers who join for a specific title, streaming platforms must put more focus on the functionality of their interface. If subscribers can’t easily find a new title to watch, regardless of the quality and quantity of content available, they are more likely to churn from the platform. The interface and recommendations become an important tool for retention. Both Apple TV+ and Paramount+ illustrate that marketing a single title can drive growth, but without a great user experience post-sign up, retention is a challenge.

While Netflix reported an increase in subscriber growth globally, according to Kantar’s EoD research, there was a decline in US subscriber counts for Q3’22. Netflix now has a US market share of 61% in Q3’22, down from 66% in Q3’21. While Apple TV+ and Paramount+ see cancellations due to interface related issues, Netflix cancellations are largely driven by cost. In fact, 2 out of the 3 top reasons for cancelling Netflix in Q3 have to do with money: wanting to save money (38% of cancelled subscriptions) and unwillingness to pay Netflix’s new higher prices (17% of cancelled subscriptions). The upcoming AVoD service may help with their consumer’s cost related drivers. Those who have previously cancelled due to high cost now have a lower cost option that may keep them on the platform, among other key drivers of AVoD consumers.

The overlap of subscribers who have multiple pricing tiers in their streaming repertoire is growing over time. Yet, there are still clear differences in who and what is driving growth for each type of streaming platform and where their strengths lie.

Contact our experts for a more detailed report on the performance of these three streaming options.

Despite the uncertainty around the US economy, the streaming industry remains solid. Streamers are no longer consistently looking for ways to manage the cost of their repertoires. They are looking for platforms to understand their respective needs and tailor to them.

Specific churn rates are predicted for Q4’22 in Kantar’s EoD streaming service, and expect to see boomerang behavior across all streaming tiers. In understanding these measures and what drives viewers, platforms can be well positioned to retain their base and grow.

If you would like to learn more, reach out to our experts or access our interactive data visualisation tool.

Read: US streaming market returns to growth in the second quarter